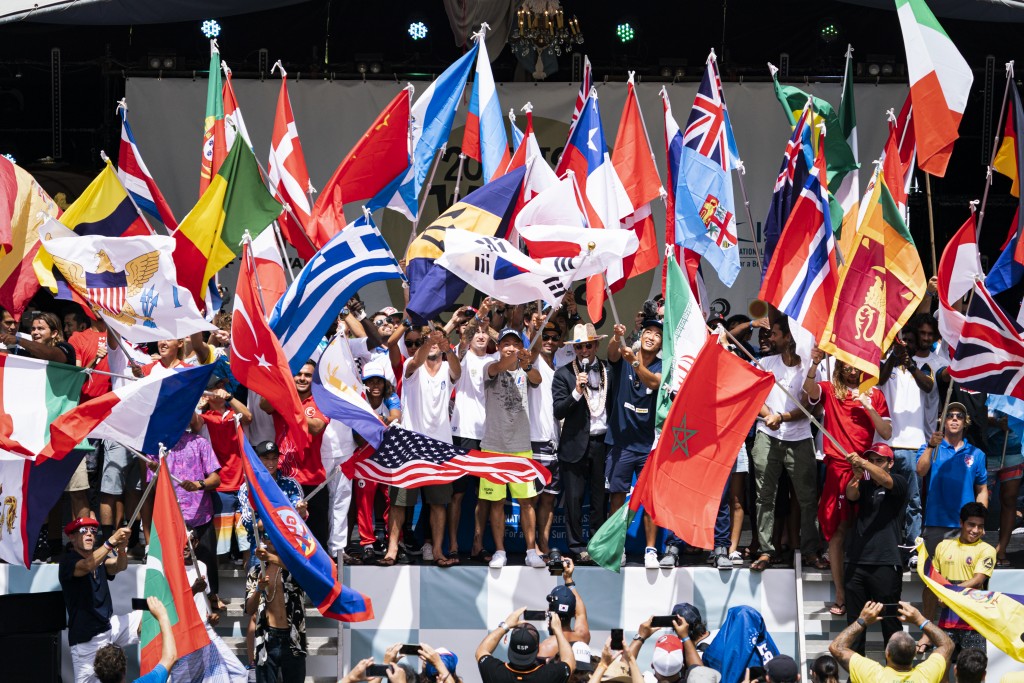 The athletes started the festivities with the Parade of Nations, marching and cheering chants of national pride among thousands of spectators.

The Sands of the World Ceremony followed where two representatives of each country took to the stage and poured sand from their local beaches into a container, symbolizing the peaceful gathering of all 55 nations through surfing. 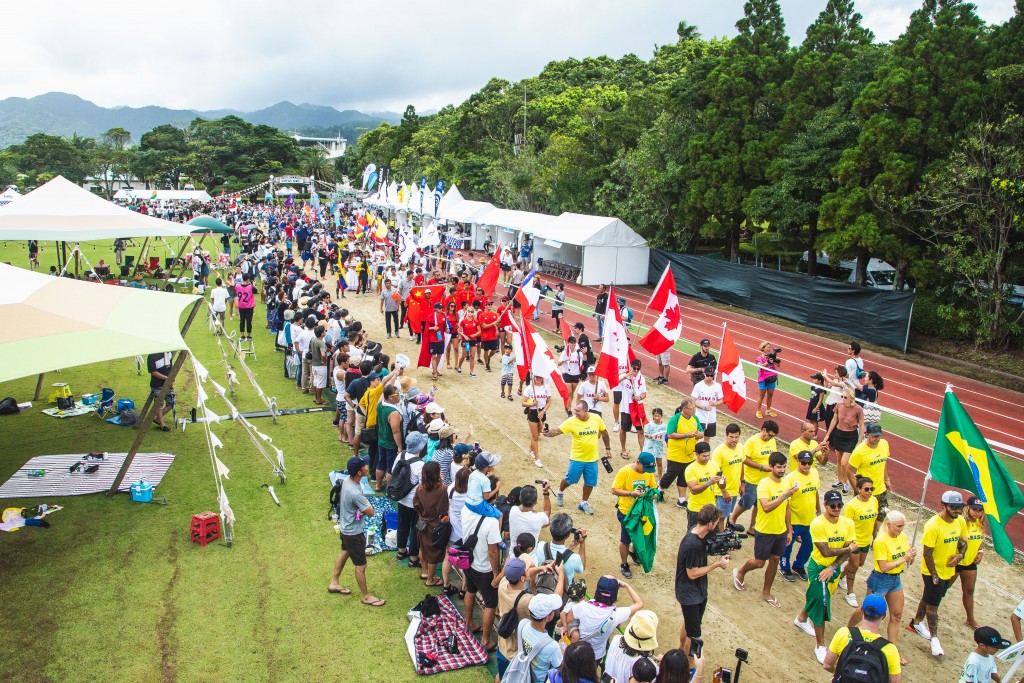 The Parade of Nations heads to the Opening Ceremony stage in displays of national pride. Photo: ISA / Pablo Jimenez

ISA President Fernando Aguerre poured the last jar of sand into the container, sand collected from the beach at Barra da Tijuca in Rio de Janeiro, Brazil the day the official vote to include Surfing in the Olympics took place during the Rio 2016 Games.

“I would like to give a warm welcome the 55 national teams, especially to Sri Lanka, Thailand, American Samoa and Lebanon for their first time at the World Surfing Games,” said Aguerre.

“It’s great to have the WSL Championship Tour surfers here today, returning to their National Surfing Teams as part of the Olympic qualification process.

“In 1996 I had a dream that the best surfers in the world would compete on their national teams such as in football, rugby and tennis. It has finally come true today in Miyazaki.

“For that reason, I will never forget this day. We are all living our dreams. I wish the very best luck to all the competitors in the competition. Let’s celebrate life, love, surf, and friendship during this historic event.” 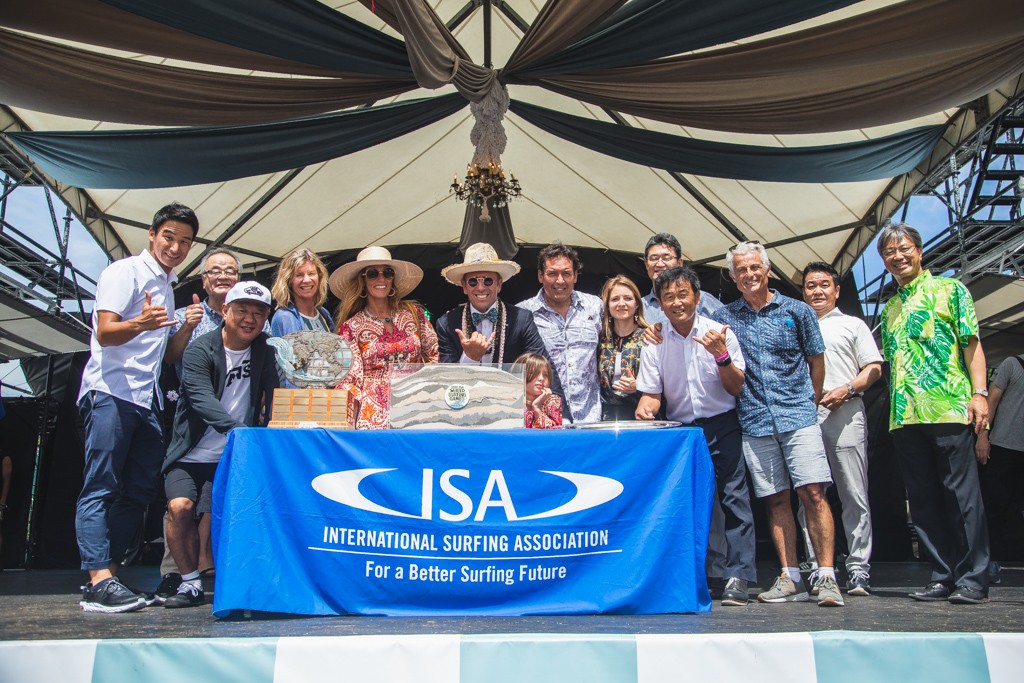 Celebrating the gathering of 55 nations, united through the Sands of the World. Photo: ISA / Pablo Jimenez

“It’s an honor and pleasure to be able to say a few words to you all today,” said Mayor of Miyazaki Shunji Kono. “I extend a warm welcome to the top surfers and surfing lovers from around the world.

“This competition is very special as the first qualifying edition for the Tokyo Olympic Games. We are proud to be able to contribute to the history of surfing.”

The competitors were treated to a traditional Wadaiko Japanese drum performance to give them a taste of the local culture of Miyazaki.

Yoshiro Mori, President of Tokyo 2020, made a scheduled visit on day 1 of the WSG to observe the action and support the surfers and nations on the road to Tokyo 2020. He took the opportunity to tour the event site accompanied by the ISA President Aguerre and the Tokyo 2020 leadership team. President Mori has been a big supporter of surfing and the WSG where he also visited the 2018 edition in Tahara City. 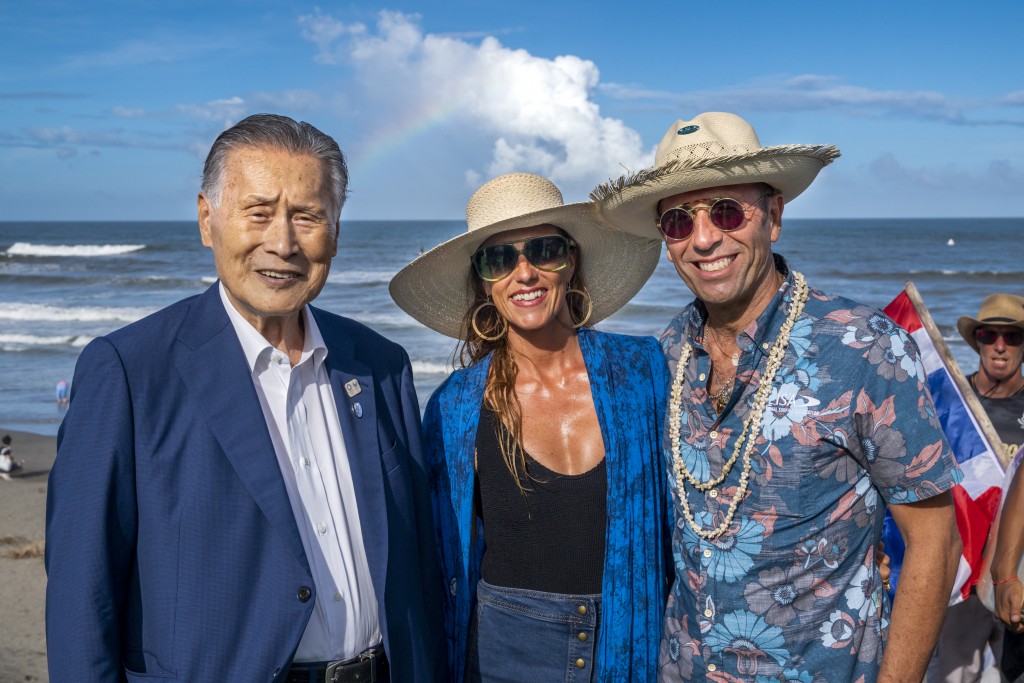 The opening rounds of competition took to the water following the Opening Ceremony, with the Women demonstrating their world-class talent to the fans at Kisakihama Beach.

USA’s Caroline Marks was the top performer of the day, earning the highest wave score (9) and heat total (17.23) of the day.

Peru’s Sofia Mulanovich also put on an excellent show, earning two waves of 8.6 and 8.17 to earn the day’s second highest heat total of 16.77.

Notably, Team Thailand’s Annissa Tita Flynn made history as the first Thai surfer to ever compete in the ISA World Surfing Games. Her score of 8.36 was not enough to pass the heat, but Flynn will get a second chance to advance in the event through the Repechage Rounds. 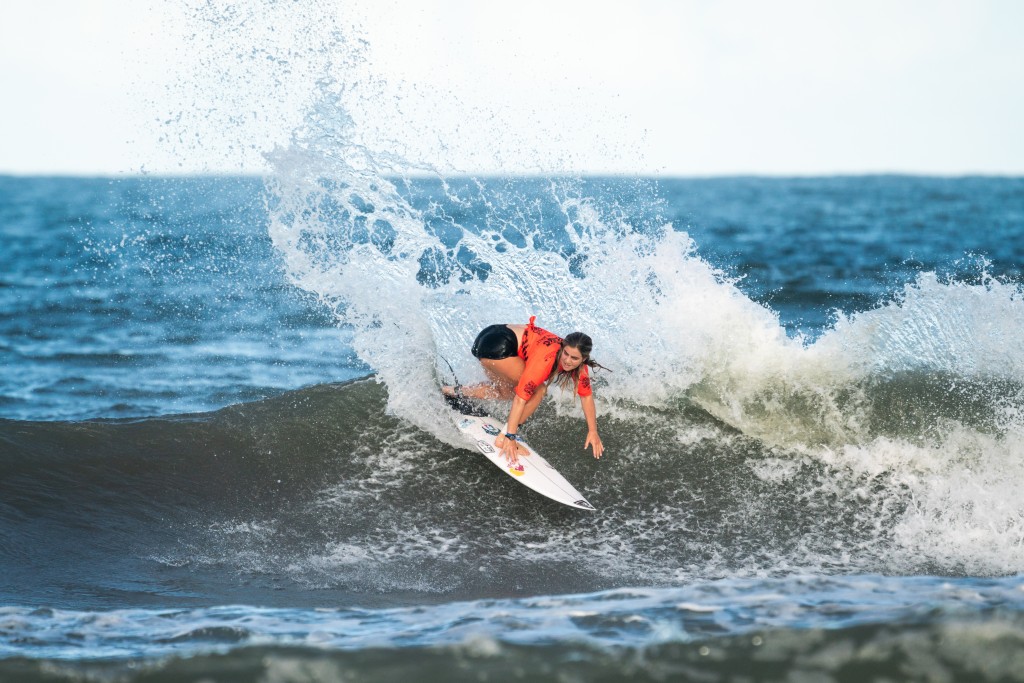 USA’s Caroline Marks on her way to notching the highest wave and heat total of the day. Photo: ISA / Sean Evans