To view schedule and heats for October 28, click here. 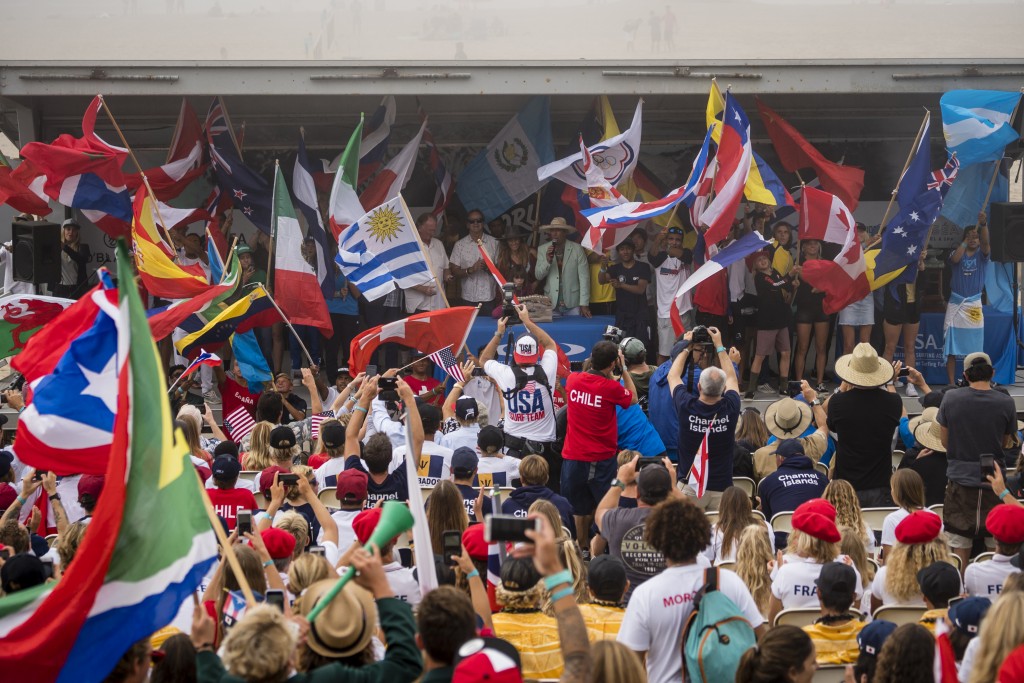 A record-breaking 361 athletes and 136 team officials from 44 countries inaugurated the event with the ISA’s festive Parade of Nations and Sands of the World Ceremony in Huntington Beach, USA.

“Welcome to the largest VISSLA ISA Juniors in history. I would like to give a big thank you to VISSLA for believing in the power of junior Surfing, and as well to the City of Huntington Beach for opening your arms, waves, and beach to all of us.

“Huntington Beach has been a part of ISA history for many years. It was here at this pier in 1996 that we awarded the first individual medals at the World Surfing Games. It was also the first Surfing event attended by members of the International Olympic Committee, which planted the seed for Surfing’s eventual Olympic inclusion 20 years later.

“Some of you may be among the first Olympic surfers in history in two years’ time at Tokyo 2020.

“Many governments have problems with each other, but we, the people, have no problems. We can all surf together in peace. I want you all to surf hard this week, revisit friendships, make new friends, and go home as ambassadors of Huntington Beach and California.”

“This is an amazing turnout and international coming together of team spirit. Congratulations to all of you for making your National Teams.

“This is a city rich in surfing heritage. Every top competitive surfer has competed right here. You are in illustrious company, so please enjoy what this amazing town has to offer.” 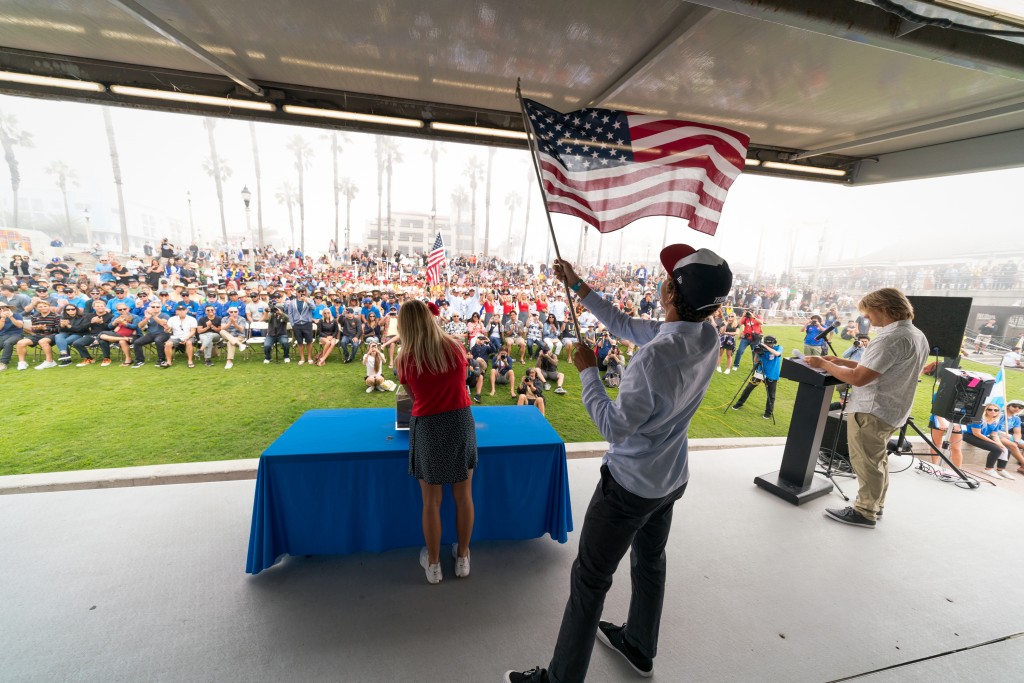 The host Team USA pours their sand from Huntington Beach into the Sands of the World container. Photo: ISA / Sean Evans

“We have talked about this for over a year. We can promise you sunshine, waves, our iconic pier, a walkable downtown, and a welcoming community that will be smiling for the next nine days.

“These are magical moments and special times in your life. You will be able to add your name of a long list of champions that have been crowned here in Huntington Beach. Cherish these moments.”

“We have seen thousands of surfing competitions here in Huntington Beach, but we haven’t seen anything like this yet. We are proud to support the future generation of Surfing.

“We are excited that the ISA and VISSLA have chosen Huntington Beach for this competition.”

Thousands of locals took to the streets to witness the 44 nations walk down Huntington Beach’s Main Street in displays of national pride. 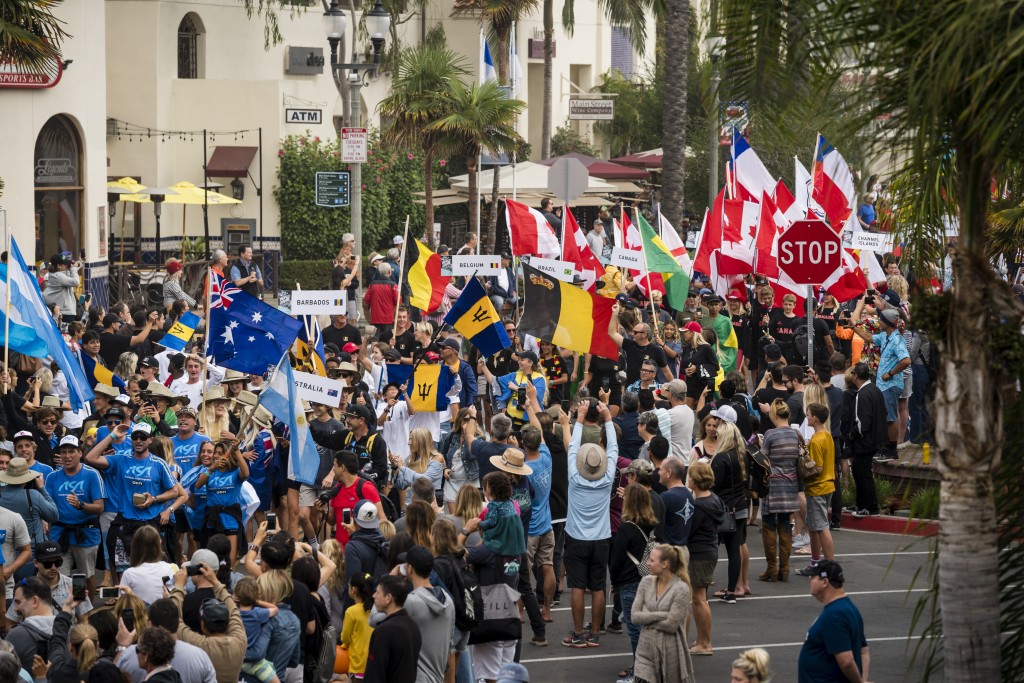 The Parade of Nations marches down Main St. in a display of national pride. Photo: ISA / Ben Reed

Following the Parade of Nations, the ISA celebrated its signature Sands of the World Ceremony in which two members from each team took to the stage and poured sand from their local beach into a glass container while waving their national flag, symbolizing the peaceful gathering of nations of the world through Surfing.

The Sands of the World Ceremony was created in Huntington Beach, USA at the 1996 ISA World Surfing Games by ISA President Fernando Aguerre.

The twelve ISA Scholarship ambassadors competing in the event also came to the stage to recognize the great strides they had made in their education and Surfing since winning ISA Scholarships.

To finish off the ceremony the delegations were treated to a local display of song and dance by Surf City Singers from Huntington Beach High school.

After the Opening Ceremony, competition kicked off with the U-18 and U-16 Boys at Huntington Beach Pier with plenty of waves on tap for the world’s best to put their talent on display.

Team Japan’s U-16 surfer Riaru Ito was the standout performer of the afternoon, earning the highest heat total of the day with 13.93 points.

For the first full day of competition on Sunday, the Boys and Girls U-16 and U-18 Main Event will continue on the south side of Huntington Beach pier in the dual podium format. 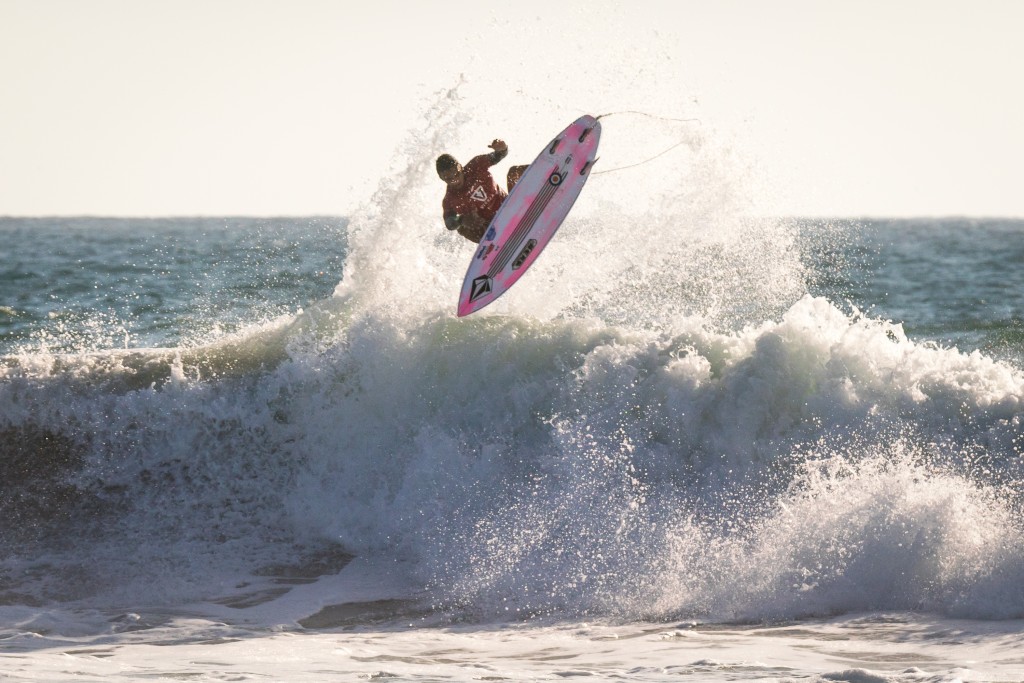 Costa Rica’s Malakai Martinez takes to the air to earn one of the top heat scores on Saturday. Photo: ISA / Sean Evans