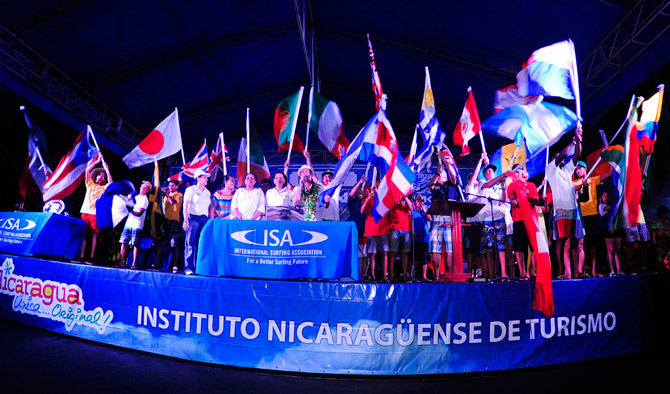 The DAKINE ISA World Junior Surfing Championship Presented by Billabong officially opened Saturday, June 8, 2013. In attendance were nearly 300 of the world’s best Junior Surfers from 30 countries, who traveled to Nicaragua from every corner of the globe. Local authorities, government officials and thousands of enthusiastic Nicaraguans were witnesses to the start of the biggest Junior Championship in the world.

The National Delegations congregated in the heart of historical and beautiful San Juan del Sur, parading through the streets filled with thousands of supporters. The final destination was the main stage at the beach at picturesque San Juan del Sur Bay as the sun was setting over the Pacific.

Two representatives from each National Team walked on stage, one waving the national flag while the other poured sand from their local beach into a glass container, symbolizing the peaceful gathering of nations through the love of surfing.

“Thank you very much! This is the most beautiful word in all languages,” remarked ISA President Fernando Aguerre. “Thank you President Daniel Ortega, Minister Mayra Salinas, the Mayor of San Juan, the people of Nicaragua, and all of the surfing teams from around the world.”

Aguerre continued, “We are experiencing a very special moment. For the first time, two new teams are participating in an ISA World Junior Surfing Championship. We have a team from Russia, and of course, Nicaragua. Welcome Russia and Nicaragua. Nicaragua is a young surfing nation. Last year we had the Masters where only two-team members represented Nicaragua, but this year the National Team has a full squad. It is a historical moment for Nicaragua and a victory for global surfing. Surfing, is a sport that is need in the world. It serves as inspiration for young people to show them that there is a better future, and after all, that there is a future with peace in the world, where all the countries gather thanks to surfing, as symbolized by the Sands of the World Ceremony.”

“It gives us great satisfaction to receive and welcome the 300 athletes and 30 countries to this warm land,” said Minister of Tourism Mayra Salinas. “Just only 4 years ago, we realized the gift we were blessed with, an incredible natural resource of beaches that present excellent and world-class conditions to practice the sport of surfing.”

Salinas continued, “We learned that through this sport and the tourism that is attached to it, we could improve the living conditions of the inhabitants of the coastal towns and contribute to the sustainable development of our country. That is why we are satisfied, to host the ISA World Junior Surfing Championship, a sport that is growing within our young citizens and we are convinced that in little time, it will become on of the strongest sports, and without a doubt will bring a lot of surprises and national pride. We especially appreciate the trust and support from the ISA and its President Fernando Aguerre, as he has expressed strong interest to continue developing our relationship with this extraordinary sport.” 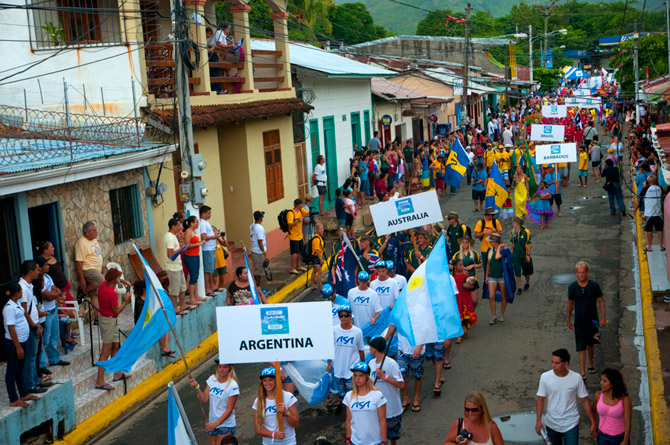 The 30 National Delegations congregated in the heart of historical and beautiful San Juan del Sur, parading through the streets filled with thousands of supporters. Photo: ISA/Rommel Gonzales

The athletes and spectators were treated to a series of Local traditional dances that had people on their feet cheering and dancing. One particular dance know as “El Viejo y la vieja,” or “The Old Man and the Old Woman” was one of the favorite as the dancers went into the crowd and danced with the spectators, providing great entertainment while showcasing the local culture.

The event starts on Sunday with The Morning Show hosted by Chris Ernst and Mateo Rojas at 7:40am (local time) followed by competition at 8am with Round 1 of Qualifying Boys under-18 and Boy under-16.

The live webcast of the entire championship is available on www.isawjsc.com