The 2013 ISA World Masters Surfing Championship officially opened Saturday, April 6, 2013. In attendance were the 20 countries that traveled to Ecuador from every corner of the world. Local authorities, officials and thousands of enthusiastic Ecuadorians were witnesses to the start of the World Championship.

The National Delegations congregated in the heart of Montañita and walked through the streets that were filled with thousands of supporters. The Parade of Nations route then took a turn to the beach and finished at the Concha Acustica stage, that was located adjacent to the ocean. When arriving to the stage, two representatives of each team walked on stage, one waving the national flag while the other poured sand from their local beach into a glass container, symbolizing the peaceful gathering of nations through the love of surfing.

“I am very happy to see the love of Ecuador’s people for the ocean, and I have high hopes for this championship and that it marks the relationship between people and the ocean,” remarked ISA President Fernando Aguerre. “Montañita is a wonderful place; it’s an incredible paradise! Take care of it and give it your love. Thank you Ecuador, Santa Elena, Montañita, the government, the private sector and the people of Ecuador. Thank you for having us.”

“What happiness and joy it brings me to be in my land and know the pride that we feel for once again organizing an event of this magnitude and transmit to the world that we are capable of organizing and executing in a successful way,” said Ecuador’s Minister of Sport Jose Francisco Cevallos, referencing the two previous ISA World Championship held in Ecuador. “Thank you very much for all the support that has been given to this magnificent event.”

Following the Opening Ceremony, a 7-meter (22 feet) sculpture was unveiled, honoring Montañita’s historic contribution to the development of surfing in Ecuador. This sculpture marks Montañita as an international surfing destination, where it will welcome surf travelers from around the world 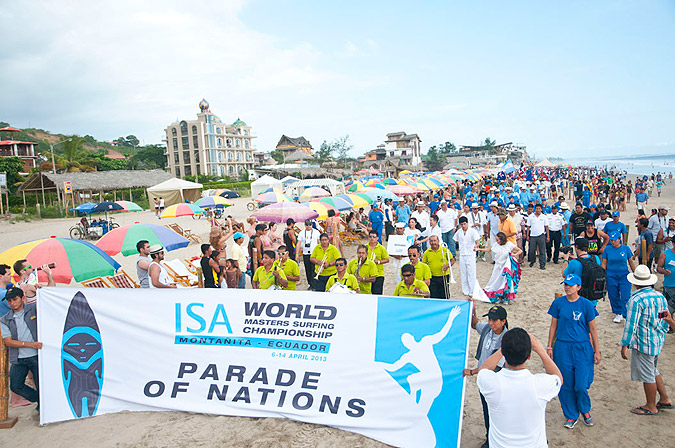 20 National Delegations paraded through the streets and along the beaches of Montañita in Front of Thousands of enthusiastic Ecuadorians. Photo: ISA/Rommel Gonzales