The host nation Team USA made history and won their first-ever Team Gold Medal at the 2018 Stance ISA World Adaptive Surfing Championship presented by the City of San Diego. 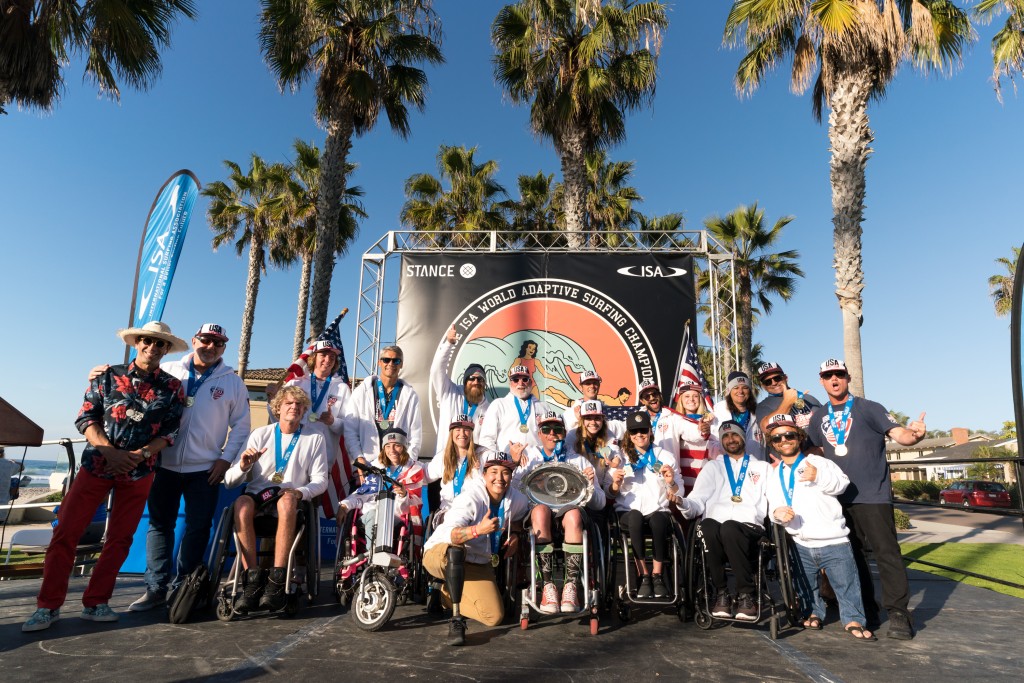 Propelled by five individual medals, Team USA was able to end the two-year streak of Team Brazil and make it to the top of the podium.

Highlighting USA’s stellar performance was Alana Nichols with the Gold Medal in the Women’s AS-3. Christiaan Bailey (AS-4), Jeff Munson (AS-3) and Sarah Bettencourt (Women AS-4)  all contributed valuable points with Silver Medal finishes.

Team Brazil earned the Silver Medal followed by Team Chile with the Bronze and Team Hawaii with the Copper.

Colombia’s 13-year-old Freddy Marimon continued his amazing run through the competition and saved his best for last, posting the highest wave score and heat total of the entire event. Marimon’s perfect 10-point ride and 18.83 heat total led him to a well-deserved Gold Medal in the AS-5 Division. 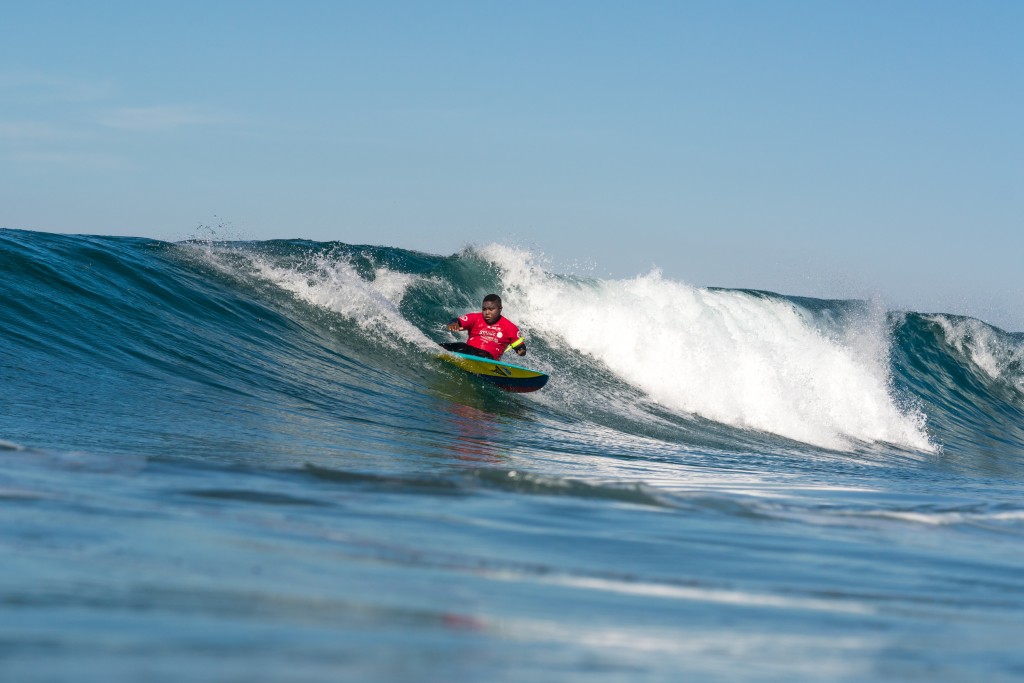 Colombia’s Freddy Marimon on his way to notching the highest wave score and heat total of the entire event in the AS-5 Final. Photo: ISA / Sean Evans

In a string of historic moments, Melisa Reid’s Gold Medal performance for Team England in the Women’s visually impaired division marked a milestone for the sport, crowning the first women’s World Champion in the division.

“This is my first international surfing competition, so it feels amazing to come out here and win this world title,” said Reid.

“I came here thinking that I would just be surfing against the guys, but knowing that there are enough visually impaired women for a separate division is incredible.

“I hope that my performance gets more visually impaired girls and guys out in the water.”

Seven past ISA World Champions repeated their feats to return to the top of the podium on Sunday including Denmark’s Bruno Hansen (AS-4), Hawaii’s Ann Yoshida (Women’s AS-4), Brazil’s Fellipe Lima (AS-3), Australia’s Matthew Formston (AS-VI), USA’s Nichols (Women’s AS-3), South Africa’s Antony Smyth (AS-1) and Japan’s Kazune Uchida (Women’s AS-1).

Denmark’s Bruno Hansen continued his domination in the AS-4 Division, earning his fourth consecutive Gold, which makes him the sole adaptive surfer in the world with four individual world titles.

“It’s unbelievable to win my fourth in a row,” said Hansen. “I knew I had it in me, but I also knew that the other competitors are hungry as well.

“I’m honored that I have arrived at a point where the younger generation looks up to me. Hopefully I can guide and be of advice to these up and coming kids.” 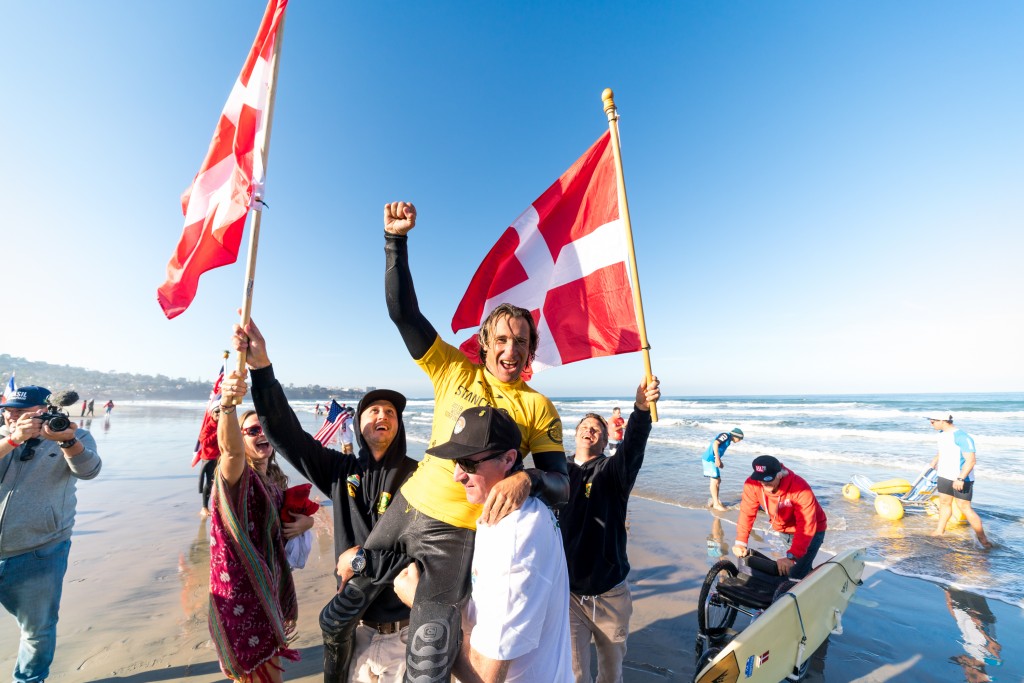 Denmark’s Bruno Hansen just as excited with his fourth gold as he was with his first. Photo: ISA / Sean Evans

Showcasing the growth of the sport, five new champions were crowned. England’s Reid (Women’s AS-VI), Australia’s Samantha Bloom (Women’s AS-5), Canada’s Victoria Feige (Women’s AS-4), Brazil’s Henrique Saraiva (AS-2), and Colombia’s Marimon (AS-5) rose to the top of adaptive surfing for the first time in the four years of the event.

“I am shocked,” said Canada’s Feige. “I am so ecstatic and surprised.

“I learned how to surf before I was injured in a snowboarding accident. I went back in the water after my injury, but I didn’t know what was possible. It wasn’t until I first came to the ISA in 2016 and I saw the world’s best in the water. It totally changed my perspective on what is possible as an adaptive surfer. I went back home and improved as a surfer, knowing that anything is possible.” 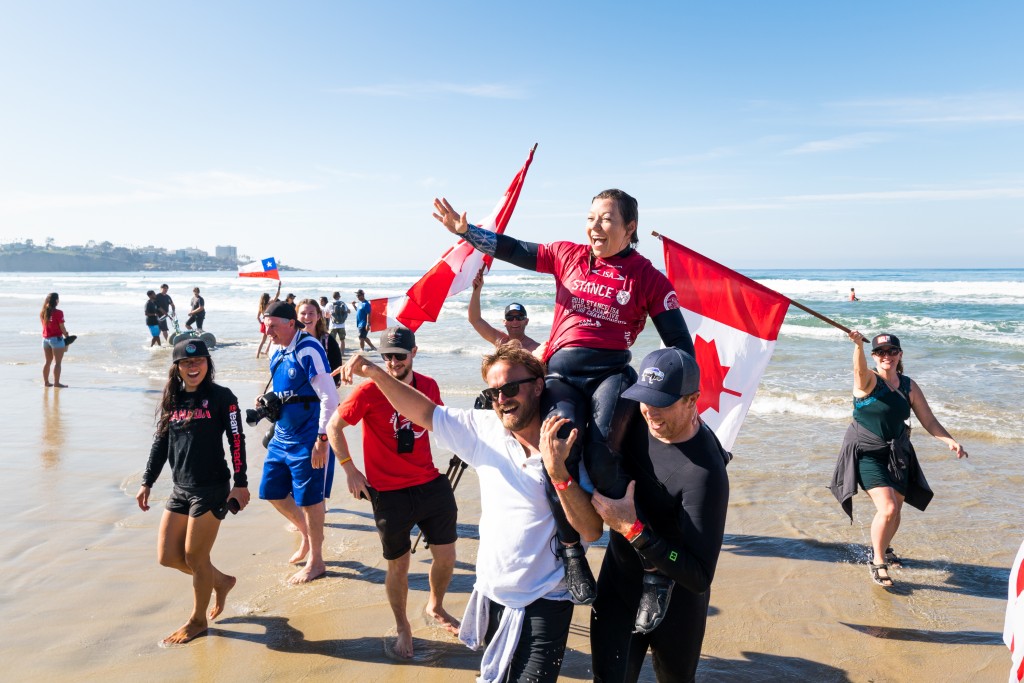 Canada’s Victoria Feige is overcome with joy as she earns the Women’s AS-4 Gold Medal. Photo: ISA / Sean Evans

Sunday morning kicked off with a renewed swell at La Jolla Shores. The increase in waves and glassy conditions provided the perfect platform for the world’s best to display their elite talent on the Finals.

Twelve individual world champions were crowned, earning points for their nations in the team ranking.

Notably, in the one of the tightest finals of the day, USA’s Alana Nichols caught a wave as the time expired against Hawaii’s Meira Duarte Va’a. Sitting in Silver Medal position, Nichols’ scored a 4.9 to move into the Gold Medal position, defending her 2017 Title. 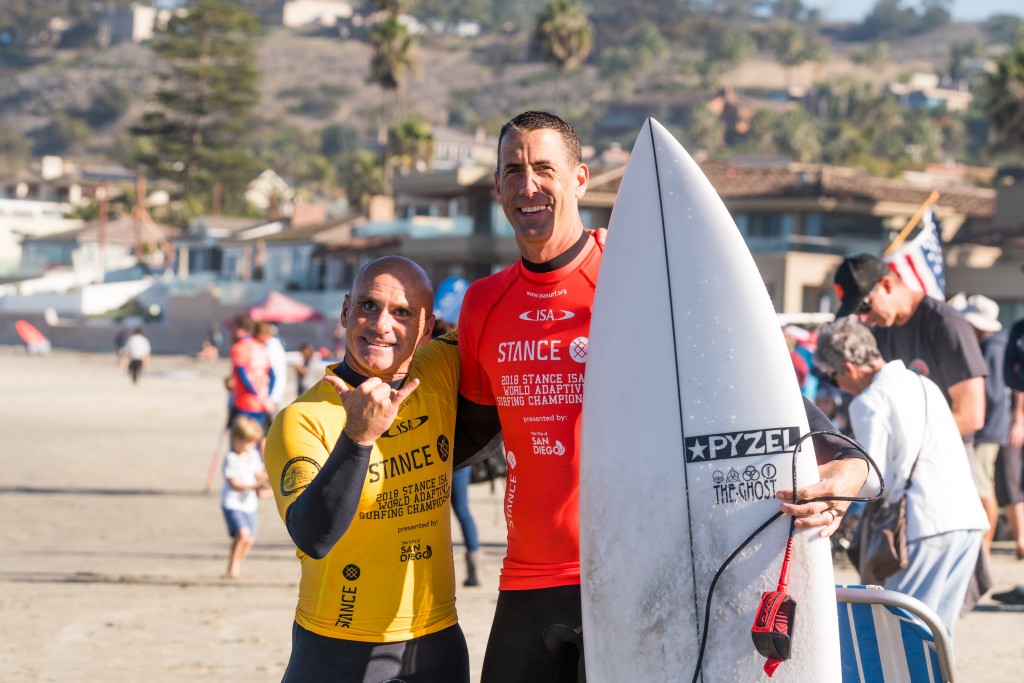 “It’s been another incredible event. We had great waves, great weather, and unbelievable surfing.

“We want to say thanks to everyone who tuned in to watch around the world, all the athletes, and all the team supporters. Also, a special thanks to all the volunteers that make this event so incredible.”

“What a week of competition. We watched the sport of adaptive surfing progress before our eyes. We had new World Champions make a name of themselves on the global stage, and we also had proven World Champions continue to stake their claims as the best in the world.

“Most importantly, we had a record number of competitors and women participating in the event, spreading the sport to new surfers around the globe. Adaptive surfing has a healing power that has proven to have a positive impact in the lives of those with physical challenges, so we hope to keep growing the sport to make the world a better place, one surfer at a time.

“The high-performance action that we witnessed this week leaves me with no doubt that adaptive surfing would be a valuable addition to the Paralympic Games. We will continue to honor the dedication that these surfers have shown us in the water and push to get the sport to the greatest sporting stage.”

You can replay the webcasts from the 2018 Stance ISA World Adaptive Surfing Championship here.