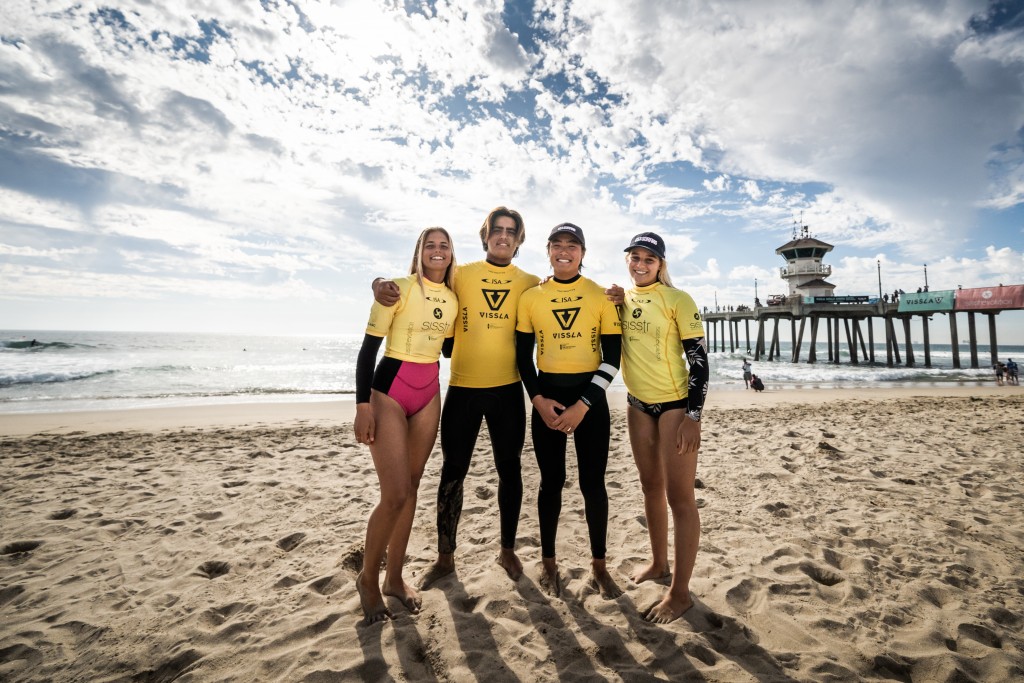 In a tightly contested Final that came down to the final waves of each team, USA edged out Silver Medalist Spain for the Gold by less than three tenths of a points.

Team Japan earned the Bronze, also narrowly missing the Gold by less than half a point, and Team Hawaii took the Copper.

“I’ve known all my teammates for what seems like forever, so it’s amazing to win this Gold Medal with them.” 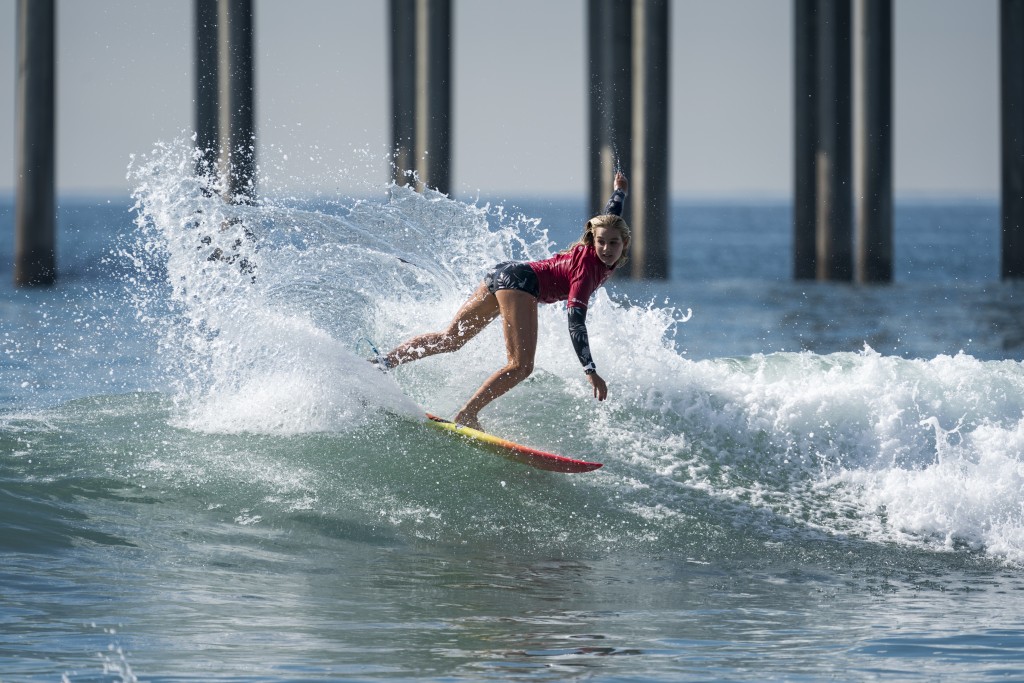 USA’s Sam Sibley has been eliminated from the individual competition, but that didn’t stop her from leading her nation to Gold in the Aloha Cup. Photo: ISA / Ben Reed

Heading into the final day of competition USA and Japan are locked in a race for the overall team Gold Medal, mimicking the nail-biter that played out in 2018 that resulted in Team Japan’s historic first-ever Gold Medal in the event.

Team USA held onto their lead through seven days of competition, holding the advantage over Team Japan with seven surfers remaining in the event, five of whom are seeded in the Main Event Finals of their respective divisions.

Team Japan trails by 585 potential points, with six surfers remaining in the event, three each in the Main Event and Repechage Divisions.

Trailing in the Bronze Medal position is Team Hawaii followed by Spain, looking to retain their podium positions on the final day.

Australia and France currently find themselves on the outside of the podium positions, but both have surfers that have advanced through to the final day to attempt one final push for a team medal. 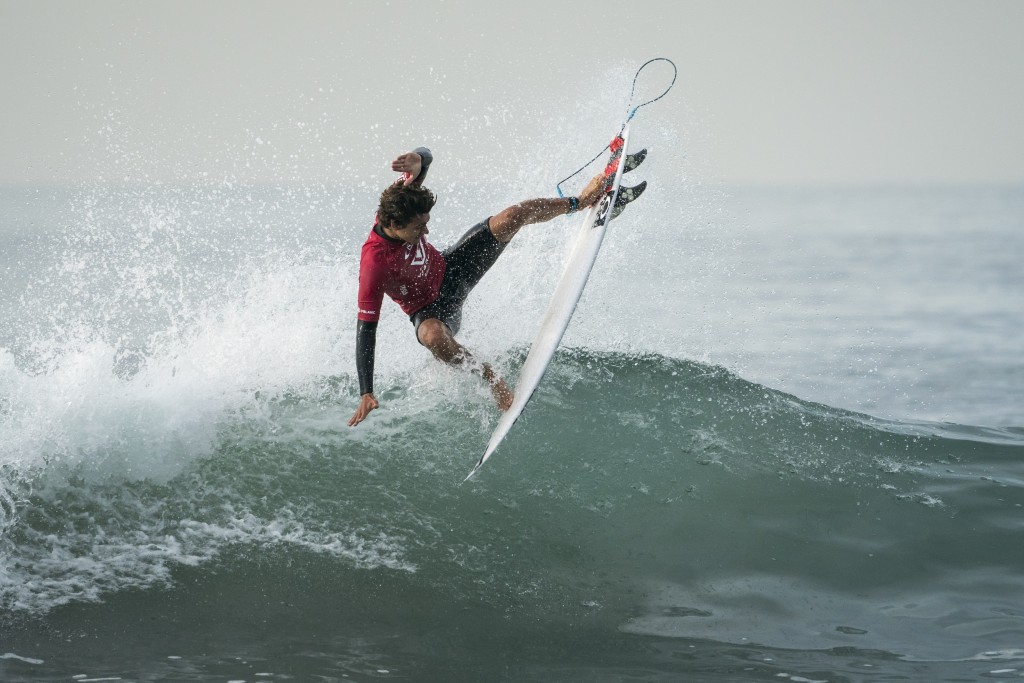 France’s Tiago Carrique will look to push his country to a podium finish on Sunday. Photo: ISA / Ben Reed

The penultimate day of competition got underway with more excellent, clean conditions in Huntington Beach. While the swell had slightly backed off, the world’s best U-18 surfers still put their world-class talent on display.

Through the Repechage Rounds past World Champions Alyssa Spencer and Rachel Presti were eliminated in the Girls U-18, making room for a first-time World Champion in the division.

The defending Boys U-18 Gold Medalist Keanu Kamiyama also bowed out of the competition and now will be rooting for his teammate and 2017 World Champion Joh Azuchi on the final day of competition.

Raúl Ríos, the last Peruvian remaining in the event, earned the day’s highest heat total with 15.60 in the Boys U-18.

“I am the last surfer left for Peru, so our team is really united,” said Rios. “They are always on the beach sending me their good vibes to push me to keep going.

“I am happy with where I’ve got so far in this event. I’ve been concentrated and training hard. I’m going to give it my all in the remainder of the event.”

USA’s Sawyer Lindblad was the standout for the women, earning the highest heat total with 14.66.

The final day of competition will feature the Main Event Finals, Repechage Finals, and Grand Finals across all divisions – Boys and Girls U-16 and U-18.

The top eight teams from the 2018 edition of the event faced off in the relay race, featuring two boys and two girls from each team. Each member of the relay catches two waves during the 45 minute heat, with the sum of each wave score summing up to the team total. 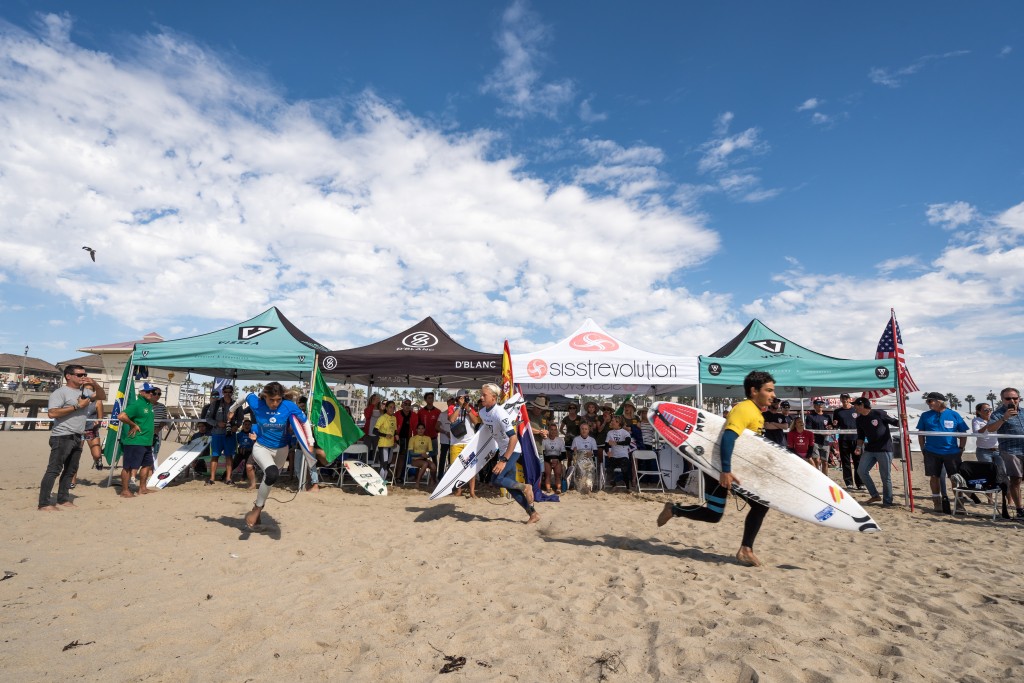 ISA Aloha Cup Semifinal 2 is off to the races. Photo: ISA / Sean Evans

Team Japan, Hawaii, France, and South Africa faced off in the first Semifinal, with the defending Aloha Cup Gold Medalist USA, Australia, Spain, and Brazil competing in the second Semifinal.

Japan, Hawaii, USA, and Spain advanced to the Final to contest the event’s first Gold Medals.

The Final was fought neck and neck till the end, with all nations in a position to take Gold on their last waves in the water. Tension on the beach built with chants and cheers to see how the final waves would unfold.

Holding the Gold Medalist position, Team Spain’s anchor Iker Amatriain fell on his final wave, earning a score of only 1.07 that left the door open for USA to sneak ahead.

USA’s anchor, Taro Watanabe, earned a 3.7 with one solid turn that overtook Spain for the lead.

USA, Japan, and Spain made it back to the boxes with Team Hawaii’s Kai Martin needing a score in the 6-point range. As time ticked away, the ocean never delivered the wave Martin was hoping for and he could only muster a 1.70 score in the shorebreak, confirming USA’s Gold Medal position.

“Congratulations to Team USA for repeating as Gold Medalists in the ISA Aloha Cup.

“This medal event requires teamwork, strategy, and intelligence, all of which USA showed brilliantly in their heats.

“A week of competition with 342 surfers from 44 nations culminates tomorrow as we are set to crown World Champions. The Team Title race is tight and will surely be one to remember.”

The official Surfline forecast is calling for waves in the waist high range for the final day of competition.

The remaining event schedule is as follows*:

November 3 – Competition on the south side of Huntington Beach Pier, 7am – 12:15pm
November 3 – Closing Ceremony at Pier Plaza following the close of competition, 1:30pm