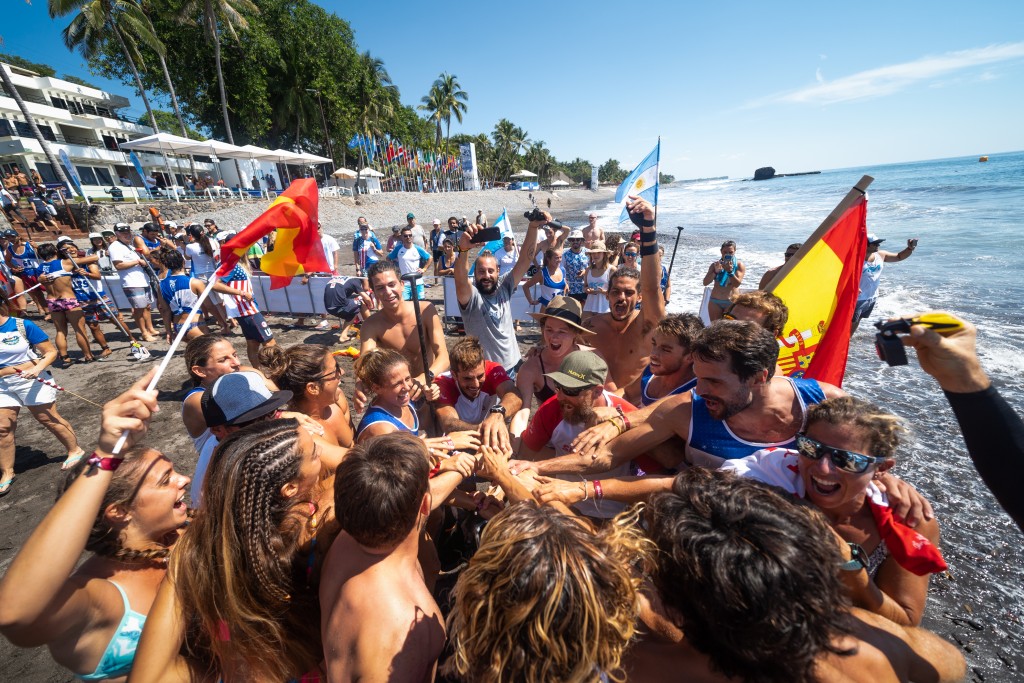 Team Spain lets their emotion show as they take the Gold Medal in the Team Relay. Photo: ISA / Sean Evans

“It was tough because it’s been a long season, but coming to the last event of the year, one of the most important ones and winning Gold, makes all the sacrifice worth it,” said Abascal.

“We are going to give it our all tomorrow in the Technical Race. We think that we can be at the top of the podiums.”

The Relay Gold for Team Spain added to their strong start thus far in the event, led by Esperanza Barreras’ World Title in the Women’s SUP Distance Race.

Team France followed Spain with the Relay Silver, USA the Bronze, and Japan the Copper. 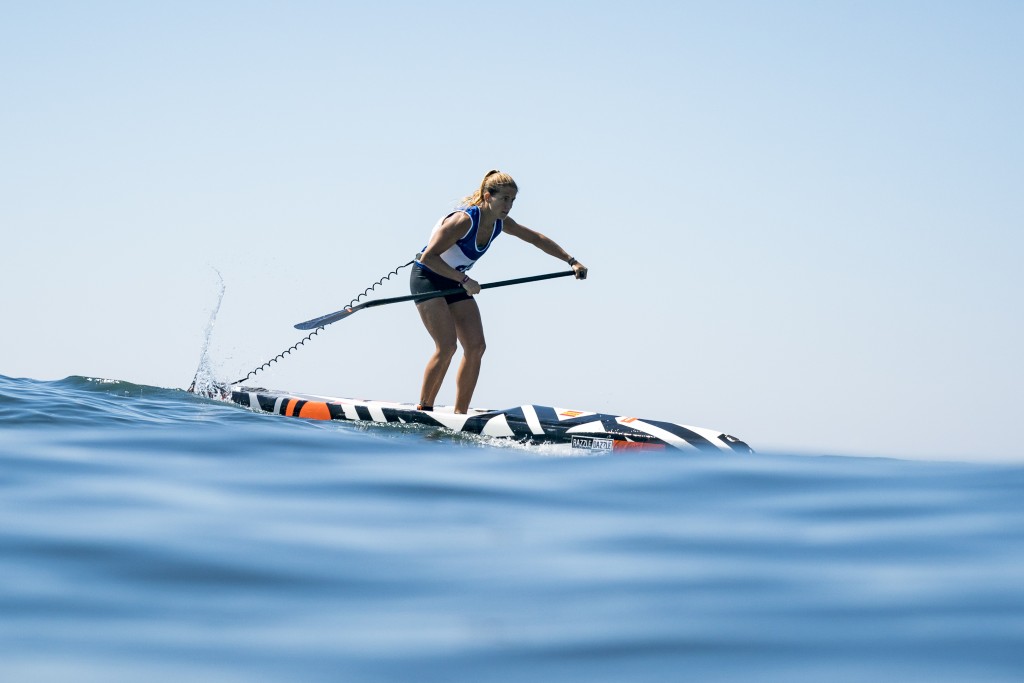 With seven of the fifteen podiums in the event determined, Team France has jumped out to the overall team points lead, followed by Team USA and Team Spain looking to overtake the lead on the back half of the event.

Wednesday will have strong implications in the team ranking, set to crown six World Champions in the SUP, Paddleboard, and SUP Junior Technical Races.

The SUP Technical Race Semifinals started the morning of competition with two men’s heats and two women’s heats, where six competitors per heat advanced to the Finals to take place on Wednesday.

USA’s Jade Howson, who earned a SUP Sprint Gold Medal on Sunday, was the strongest woman paddler with a top time of 21:04.

USA’s four-time ISA Gold Medalist Candice Appleby will look to bounce back from a disappointing result in the Distance Race, having qualified for the Women’s SUP Technical Final.

Italy’s Leonard Nika, brother of SUP Sprint Gold Medalist Claudio Nika, was the standout male racer of the day, completing the Technical Race with the fastest time in 18 minutes and 41 seconds.

France’s Titouan Puyo followed just two seconds behind Nika to advance to the Final as well.

Brazil’s Vinnicius Martins, who earned the Men’s SUP Distance Gold on Monday, advanced through to the Final with other world-class athletes following suit, such as USA’s Connor Baxter, France’s Martin Vitry, Peru’s Itzel Delgado, Japan’s Rai Taguchi, and Denmark’s Casper Steinfath, among others.

Steinfath made his debut in the event after withdrawing from his specialty discipline, the SUP Sprints, due to a fever. Steinfath, still feeling under the weather, put on a gutsy performance to advance to the Final.

“Finally getting on the water was a big relief for me,” said Steinfath. “I am looking forward to going all out tomorrow – whether just to finish the race or to go for Gold.

“Regardless, I am going to have a lot of fun and watch the best in the world do what they do.” 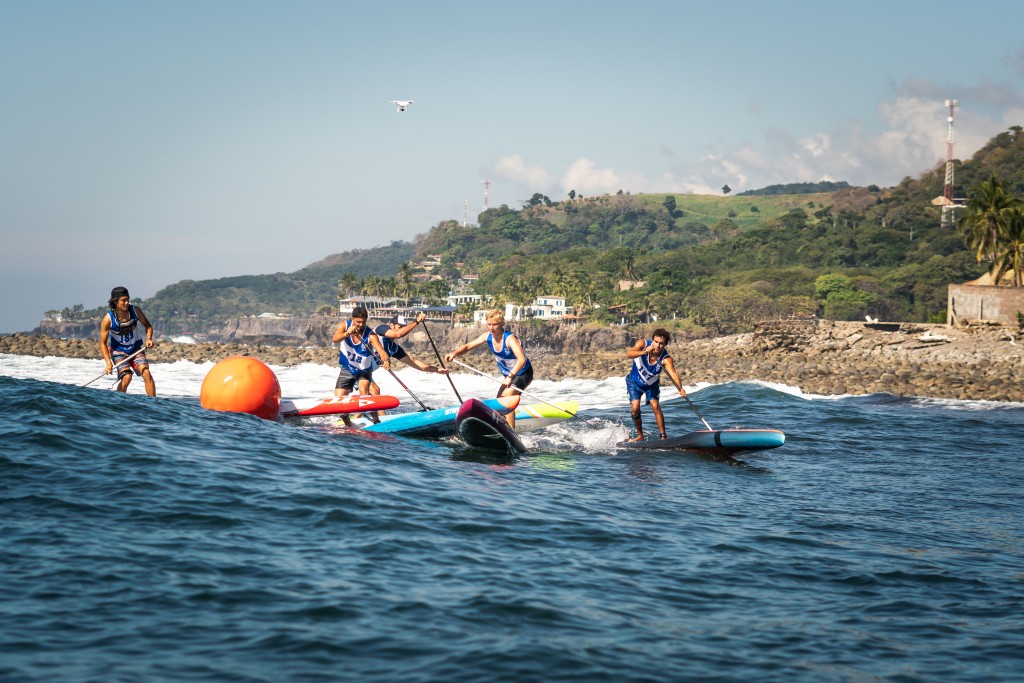 The Team Relay Race featured ten nations with a SUP and Paddleboard racer of each gender to comprise teams of four. Each athlete completed a lap of the course before tagging their next teammate into the race.

The Men’s Paddleboard racers started in dramatic fashion. Coming through the surf zone of the course, a set of waves at El Sunzal ripped through the lineup, mixing up the field of competitors.

When the foam had settled, Team Spain’s Ruiz and Team France’s Julen Marticorena emerged, while the rest of the field struggled to recover from the large waves.

On the third lap of the race Team Spain pulled ahead of France, a lead that held true until the finish line. 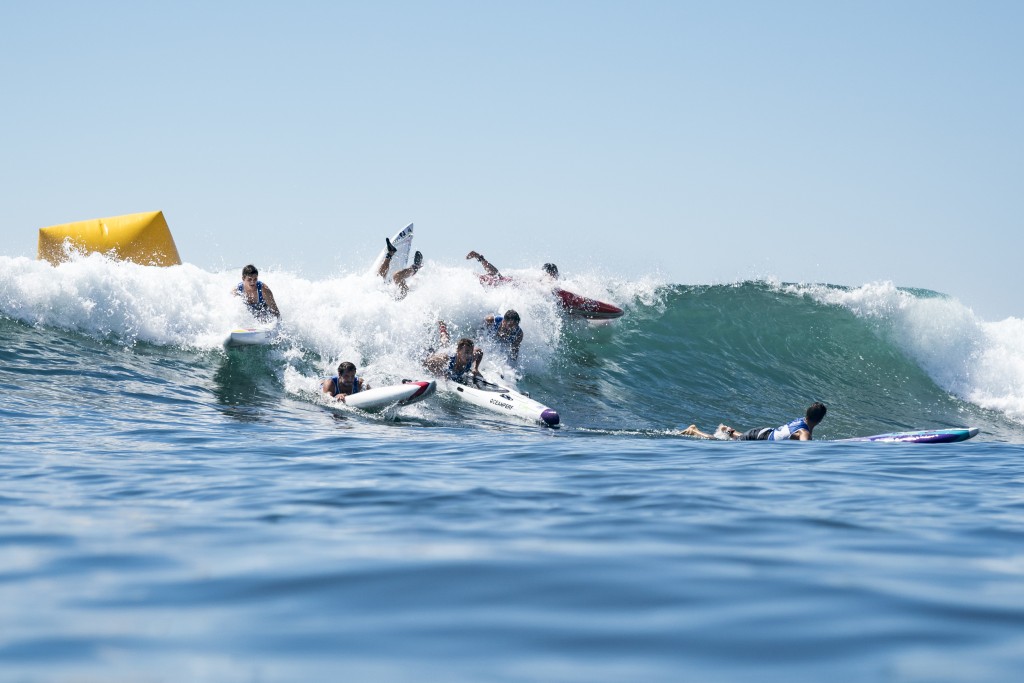 Carnage through the wave section of the first lap of the Team Relay. Photo: ISA / Ben Reed

“The relay is a great time to see the teams work together and put their camaraderie on display. Team Spain put on a fantastic, all-around performance more than worthy of the Gold.

“Some of the most exciting racing is yet to come, as tomorrow we will crown six World Champions in the Technical Races. It will be must-watch racing on the beautiful coastline of El Salvador.”