The Caithness Collection Scottish National Surfing Championships 2018 took place over Easter Weekend in Caithness. The early rounds of the event commenced on Saturday the 31st of March at Sinclairs Bay in some fun beachbreak peaks and continued onto Sunday where the Bodyboard, Juniors and Longboard divisions were wrapped up.  The Open Men, Open Women and Masters were finished on Monday the 2nd of April at Thurso-East.

This years event was head judged by The European Surfing Federation’s Tiago Matos from Portugal.  The SSF also had one of the first ever all female judging panels and applied the 4 man priority for the first time ever.

Mark Boyd claimed his 5th national title on Monday having previously won the Longboard title 4 times from 2011-2014 but this would be his maiden Open Men’s title having been runner up in 2016 and 2017 and making podium finishes since 2009.  Boyd ended the Broch domination in the Open Men’s division which has been won by surfers from Fraserburgh since 1995. 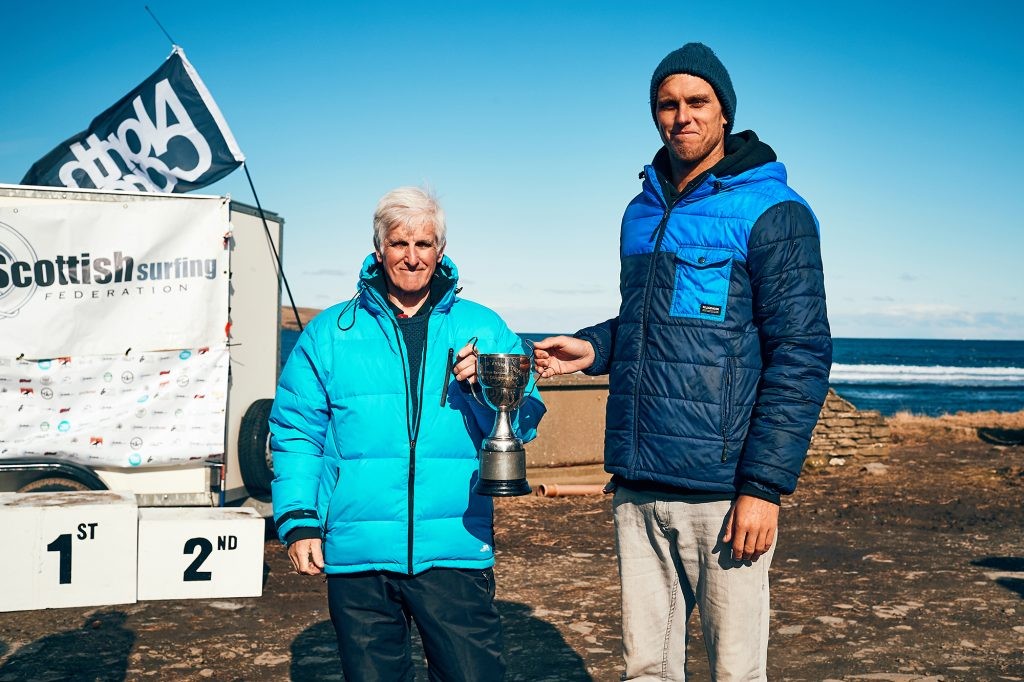 It was a repeat of last year with a close final again between Boyd and Watt – Watt opened up the heat with a 6pt ride putting the pressure on from the outset but Boyd chipped away sitting underneath the pack in 4th priority.  Boyd would gain the lead and 1st priority with 5 minutes to go putting him in a confident position as the heat drew to a close.  Boyd selected a good wave in the dying minutes to keep other competitors off but Andrew MacLeod would make a priority error also taking off on Boyd’s wave preventing Boyd from increasing his lead and MacLeod earning himself a priority interference call meaning his second wave score would not be counted, but it wouldn’t change the outcome of the heat.

There would be another maiden victory in the Open Women this time for Phoebe Strachan who was also runner up in 2017.  A big upset in the first round of competition this year when last years champion Megan MacKay was eliminated by Catriona MacDonald and young up and comer Clover Christopherson who was a stand out in the junior divisions.  Phoebe won the final at Thurso-East convincingly when she connected a right hander which reformed on the inside allowing Phoebe to then go left putting her forehand attack to good use by bashing the lip on the inside to take the win.

Craig Sutherland and Mark Cameron had some fantastic match ups over the weekend in both the Masters and Open divisions – Cameron was eager to take the Masters win after Sutherland eliminated Cameron in the quarter finals of the Open Men’s with a buzzer beating 7.5pt ride.  Cameron held the lead in the Masters final at Thurso-East well into the heat but Sutherland would change the situation after he found a nice wall on a left hitting the lip on his well honed backhand to take top spot.  Craig Sutherland dominating the masters category having won the Gathering of the Clans masters title in 2017 also but this would be his maiden Scottish National Surfing Championships Masters title. 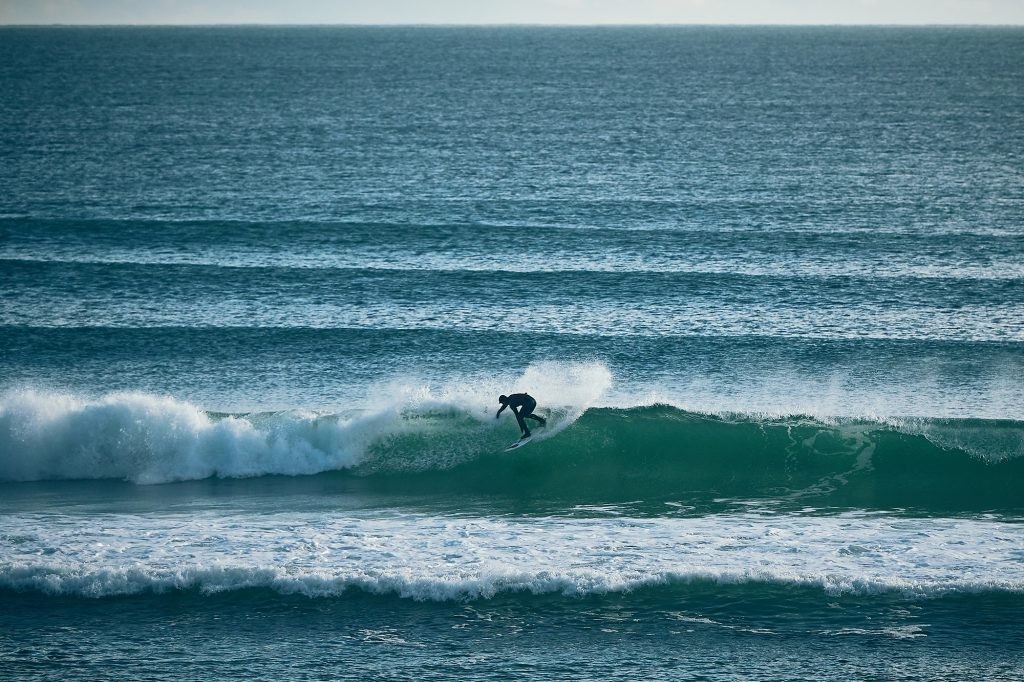 Drama in the Longboard final at Sinclairs Bay on Sunday the 1st of April when Malcolm Findlay got himself a priority interference on a wave he shared with Iain Masson – Findlay would lose his second wave score allowing Clarke to take the lead and eventually the heat win to gain his second Longboard title.  Findlay had the highest wave score of the heat with a 6pt ride but it wouldn’t be enough with the interference call – this would be the first time ever Findlay hasn’t won the Longboard division when he has been entered in the event. Clarke managed to demonstrate traditional and rail surfing on two waves gaining him the lead and this years title.

Huge congratulations also to Zach Marritt for making the final in his first ever Nationals Longboard – Zach will be one to watch in this division in the years to come, his skateboard skills and balance proving dangerous when applied to longboarding.

The highlight of everyone’s weekend was the Junior finals at Sinclair’s bay and in particular the rivalry between Craig McLachlan and Ben Larg who were absolutely tearing the small clean surf apart.  The heat opened up with fierce jostling for inside position between Ben and Craig but Ben would eventually get a priority interference leaving the door open for Craig and also Michael Wimbledon-Hall who also surfed strong to pass Ben’s 1 wave heat total.  Michael took advantage of the space whilst Ben and Craig hassled each other at the start of the heat allowing him to post a couple of keeper scores but then  Craig strung 4 backhand snaps together on a left hand runner to get himself a 8.5pt ride which put him firmly in the lead.  Ben answered back with a 7 for one really strong backhand snap on a closeout left but it wouldn’t be enough this time round.  Sister Robyn did fantastically against the boys all the way to the final.

Ben Larg would get his revenge in the U16 division.  Ben dominated this heat from the outset and although Craig was chasing him but Ben would remain in front going into the last 5 minutes of the heat with 1st priority meaning he could prevent Craig from getting another crack of the whip on any good ones. 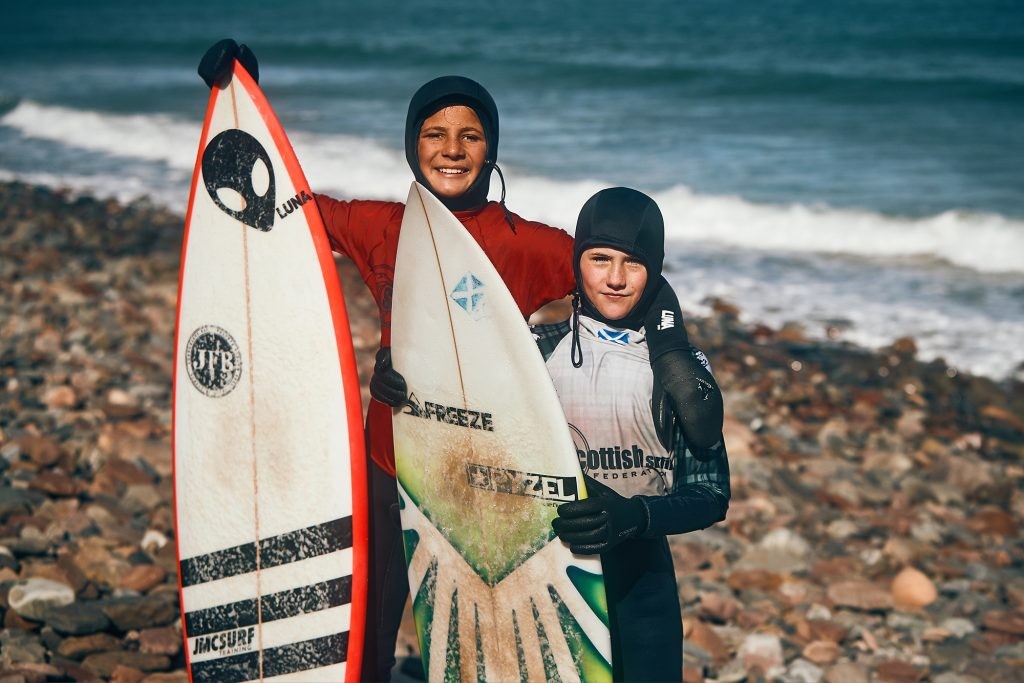 The crowd was astounded by the level of surfing by the two 12 year olds and there were roars of cheers and applause as the finalists battled it out.  The two Dunbar surfers did well to make the final especially Clover finishing 3rd against the boys.

Another 12 year old takes out the Under 18 Boys title this year with Craig McLachlan winning his first U18s.  Craigs surfing is super consistent and dynamic and it was enough to pip the older favourite to win this division – Finn MacDonald from Tiree who placed 2nd.

Clover Christopherson was a standout all event long.  The goofy footer from Dunbar has fantastic form and her solid surfing made for a comfortable victory in the U18 girls getting the nod ahead of last year’s winner Iona McLachlan.  The two youngsters Robyn and Emma taking 3rd and 4th places respectively.

Thanks to all the event sponsors, category sponsors and sponsors who gave us raffle prizes for our fundraiser. Thanks to Andre Silva for photos and Malcolm Anderson for video.