By Pablo Zanocchi of DUKE.*

What’s going on in this Central American nation is an example to follow all around the world; salt water pours in every corner of the presidential cabinet

It is hard to understand or process what is happening in El Salvador right now; it’s not normal that a whole cabinet of ministries visit an opening of an international surfing contest, or that in the same context the president of the nation hosts personally the athletes and event staff. 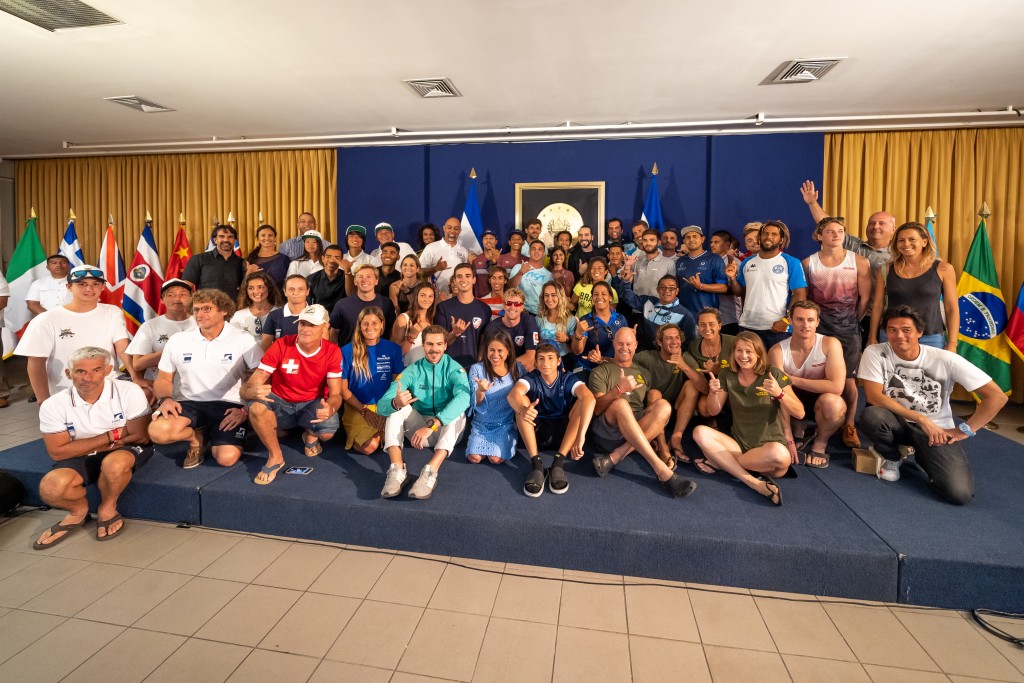 Also, it is not normal that the Tourism Minister is present at the competition every day, paying attention to the athletes, staff and invited journalists. That she is there speaking to everyone and willing to help in everything, without intermediaries, personal guards or any form of diplomacy or protocol.

It is not normal that a president takes a whole hour, face to face with surf journalists, answering to all their questions and statements, with absolute generosity, without rules or restrictions; how it should be.

It is not normal that he defends skateboarding in his city and surfing in his sea, or that he understands that surfers like a simple and comfortable guest house, and not a 20 story building, and also understands that this building doesn’t do good to the sea.

When you’re talking to friends and when talking to yourself that life is better when surfing, that you get out of the water being a better person than when you came in, and is not normal that a president of a nation says that if everyone goes surfing, this generates better health and prevents sedentary related diseases.

It is not normal that a president gets involved in the well-being of the best surfers of his country, or that he treats them like elite athletes, that their results and their future be backed and promoted by the same president. How many presidents know the name of a surfer in their country?

It is not normal that a presidential candidate has as one of their main campaign arguments to make their country an epicenter of the surfing world and thanks to this, wins with an overwhelming majority.

Also, it is not normal that a president be so young, 38 years old, that defends surfing and that has never been to the water to ride a wave (he said that if he does surf, he would break the board and himself).

It is not normal that this same president lowers the benefits to their ministries to reduce costs to the State.

It is not normal that this same president introduces himself as “Layla’s dad” on Twitter, instead of using his position as “president”, and it is not normal that Layla became protagonist at a UN Assembly, that he takes a selfie in the middle of his speech to teach all the dinosaurs that the world today works in a whole different way.

Also it is not normal that this young president takes on Maduro (Venezuelan President) and that his disruptive commentaries end up pleasing a character not so friendly like Donald Trump.

Surfing is not “normal” (ask anyone that wanted to surf in the sixties and seventies). In a football field there are two goals that don’t move, a net that doesn’t move in volley, and the same applies to many activities. In surfing, everything moves, everything shines, scares and defies. And what is most appealing is not the physical aspect, it is the spiritual and mental aspects.

In any case, it is normal that an abnormal government adopts as normal to motivate something so marvelous like seeing the sun rise surrounded by waves, with the breeze blowing from the shore and a whole life breaking ahead. There’s nothing more beautiful!

Don’t let the enchantment break, El Salvador! That every government become more surfer, that we can go work barefoot, that salt water drips from our bodies 24 hours, 365 days a year!

*This article was originally published in Spanish by www.dukesurf.com and it was translated and published with the written consent of the copyrights owner, Pablo Zanocchi. You cannot copy and paste it.