A rise in swell at El Sunzal provided an excellent canvas for the world’s best SUP surfers to perform on the sixth day of competition at the 2019 Surf City El Salvador ISA World SUP and Paddleboard Championship.

Many memorable performances took place in the larger waves, paving the path for the Final weekend of competition that will determine the individual SUP Surfing Gold Medalists and overall Team World Champion. 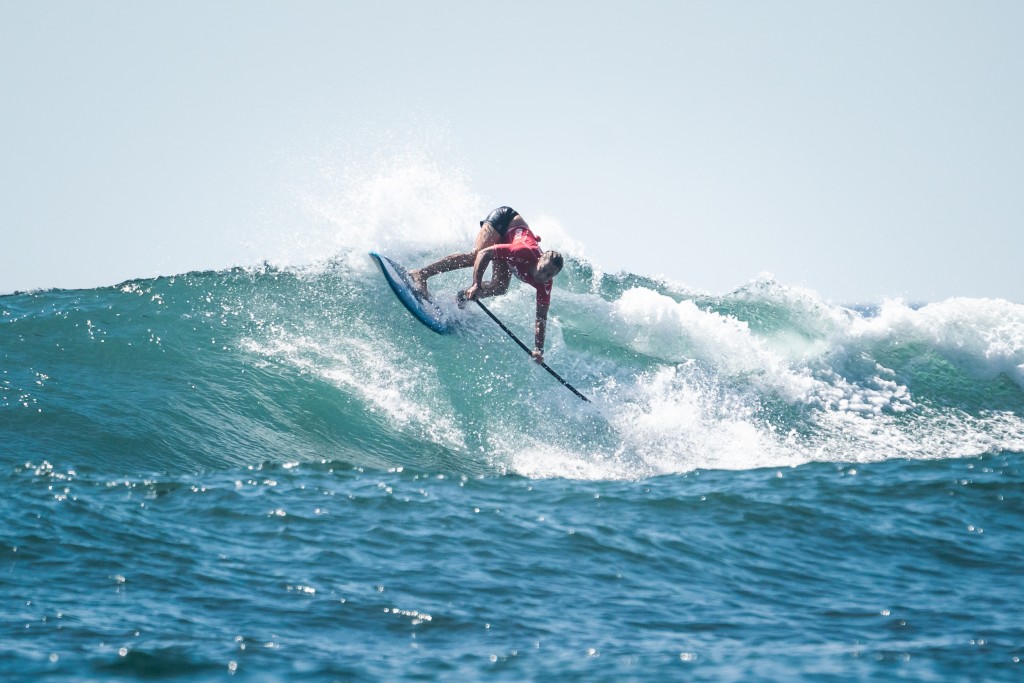 Australia’s Shakira Westdorp showing that she is still the surfer to beat as she goes for her fourth consecutive Gold Medal in the event. Photo: ISA / Sean Evans

The top performers of the opening day of SUP Surfing continued their hot streaks into day 2.

France’s Benoit Carpentier, who has never earned higher than Bronze in the event, established himself as the athlete to beat by earning the highest heat total and wave score of the day for the second consecutive day.

Carpentier’s day 2 heat total of 16.73 and single wave score of 8.73 have not been matched by any competitor in the event.

A total of nine scores were dropped in the excellent (8+) range in the Men’s Division.

Cozzolino, who is making his debut appearance in the event, has been one of the surprise performers with stylish and powerful surfing.

“It was a dream come true when Italy invited me to compete in the World Championship,” said Cozzolin0. “It’s always been my dream to represent Italy.

“As my first time in the event, my first goal was to have fun. At the same time I’m a little nervous because I want to perform my best for the team.

“It’s pretty cool to see all of the countries here competing for Gold with the team aspect. When your team wins, it feels like you win too.” 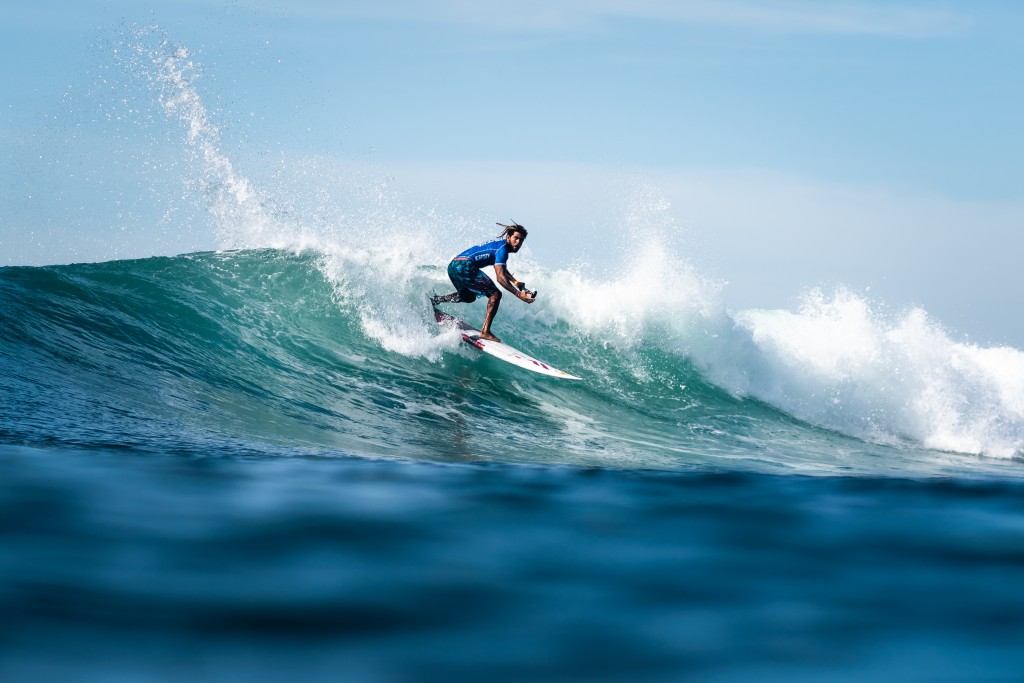 The women put on an equally impressive showing in the Main Event highlighted by Westdorp’s surfing.

Peru’s Vania Torres, who recently earned a Silver Medal in SUP Surfing at the Pan American Games, used a buzzer beater wave to advance through to Women’s Main Event Round 3.

“Winning a medal in the Pan Am Games was really a push of confidence for me,” said Torres. “There were the best athletes of the Americas there.

“After the Panams the whole country of Peru got to know what SUP is and now they are all supporting and standing behind us.

“I am happy to be competing this year in El Salvador. It’s my first time competing in SUP Surfing in the ISA. I just want to surf against the best in the world, and hopefully make the Final and get a medal.”

The race for Team Gold remains unchanged as Team France holds the lead. Team Spain and Team USA trail in second and third, respectively. No other nation can earn Gold based on the potential points available.

Neither France, Spain, nor USA lost surfers in SUP Surfing through two days, however, with Team France currently holding the lead, the farther the French surfers can advance will make the task for USA and Spain even more challenging to overtake the pole position.

The first Repechage heats of the event eliminated 20 competitors between the Men’s and Women’s Divisions.

Among those eliminated were all El Salvadorian competitors: Alex Novoa and Marvin Flores Castillo for the Men, with Josselyn Alabi for the Women.

While they may have bowed out early, their participation in this World Championship has shown a promising runway for the development of SUP and surfing in the country as the sports gain popularity at a national level. 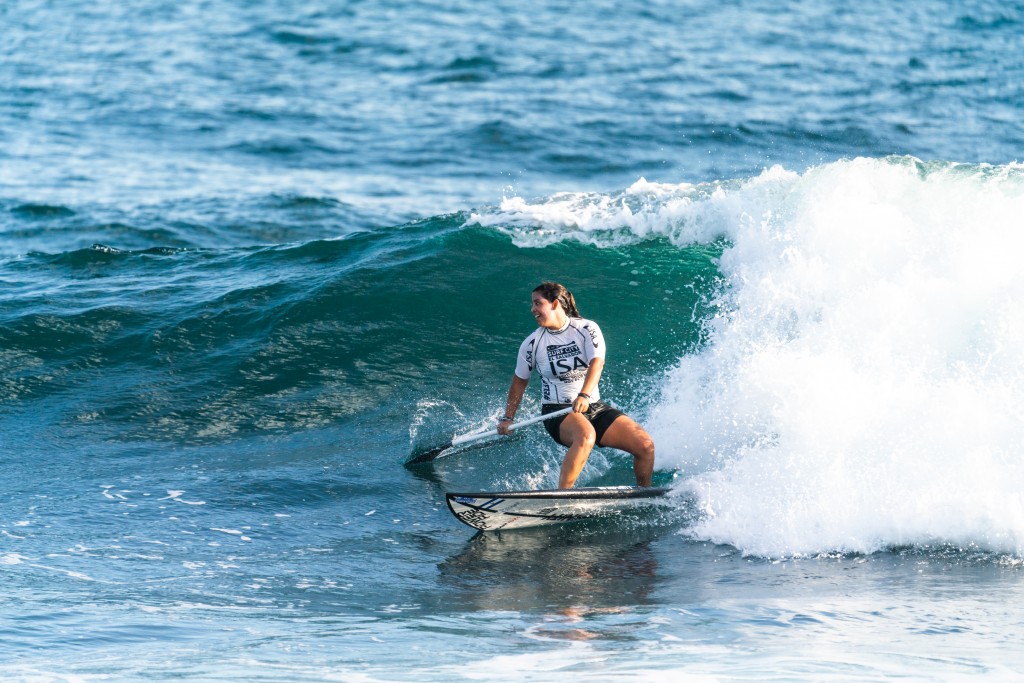 Despite being eliminated from the event El Salvador’s Josselyn Alabi holds her head high with the pride of having represented her nation. Photo: ISA / Ben Reed

The official Surfline forecast is calling for a healthy swell to top out on Saturday and hold strong for Finals day on Sunday.

“The level of surfing witnessed today at El Sunzal was absolutely stunning. The swell came up and not surprisingly so did the performances of the world’s best.

“The team environment has been electric through the beach. That is what is unique about ISA World Championships. Surfing is not only done on an individual basis, it’s also done with a whole country behind you, supporting you.”