The Right-Hand Point Break of Montañita Showed Its True Potential

The ISA World Masters Surfing Championship kicked off with excellent waves in the 4-6 feet range in the perfect right hand point-break in the beautiful town of Montañita. Thousands of fans gathered to see the world’s best over-35 year old surfers put on spectacular performances in the surfing capital of Ecuador.

“We are here in beautiful Montañita for the first day of the ISA World Masters Surfing Championship,” said ISA President Fernando Aguerre. “The waves are over-head and the world’s best masters surfers are in the water. If you have been watching the live webcast, come back again tomorrow. If you have not, tune in and you will see the incredible waves of Montañita and amazing surfing performances.” 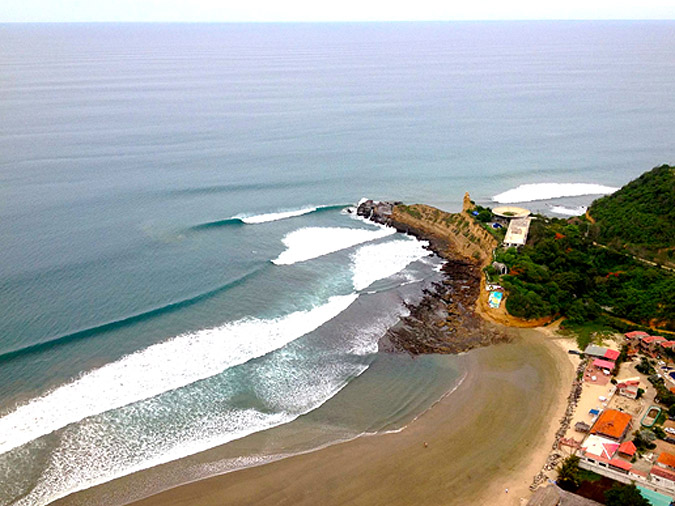 An aerial view of the contest site and the perfect waves in Montañita. Photo: Raul Guerra

The ISA World Masters is a double elimination competition, with the first two surfers always advancing to the next round.  Surfers in third and fourth place move into the Repechage round, giving them a second chance to advance.  However, another third or fourth place finish, and they will be out of the competition.

To close the day, the Kahunas (over 45) division hit the pumping well-overhead surf with six heats of Qualifying 1. Hawaii’s Mike Latronic, also a member of the 2012 Gold Medal Hawaiian Masters Team, had the strongest performance in the division, with the highest heat score of 15.93, defeating Manolo Lozano (ECU, 7.80) and Prospero Ochoa Ruiz (MEX, 4.96)

The ISA World Masters Surfing Championship resumes tomorrow at 7:40am with The Morning Show hosted by Mark Fewell.