The World’s Best Under-18 Surfers from 30 countries Put on Amazing Display in the Solid Waves of Playa Jiquiliste.

A large Sunday crowd of Nicaraguans fans, team officials and supporters, witnessed the fierce competition from the beachfront grandstands built in Jiquiliste Beach for the ISA World Junior Championship.

“We had an amazing Day 1,” said ISA President Fernando Aguerre. “We woke up this morning with a little drizzle but then it dried out and we had amazing waves and incredible offshore winds. It’s just perfect. On the first day, everybody is on the beach, you can feel the tension in the air, and the competitors were really focused.  We see a lot of nervous faces, but this is the most important day and we are rolling.”

The ISA WJSC has nearly 300 competitors and the event takes place on two separate surf sites, side-by-side. The first day of the WJSC featured Qualifying Round 1 of the Boys Under-18 in the Main Podium and the Boys Under-16 in the Second Podium, for a full day of action-packed surfing.

The 2013 DAKINE ISA World Junior Surfing Championship is a double elimination competition, with the first two surfers always advancing to the next Qualifying Round. Surfers in third and fourth place move into the Repechage Round, giving them a second chance to advance. However, another third or fourth place finish, and they will be out of the competition.

In the Boys Under-16 Division, the contest had a marathon day of surfing, with 32 Heats in Qualifying Round 1. The younger competitors also posted impressive performances with great scores. 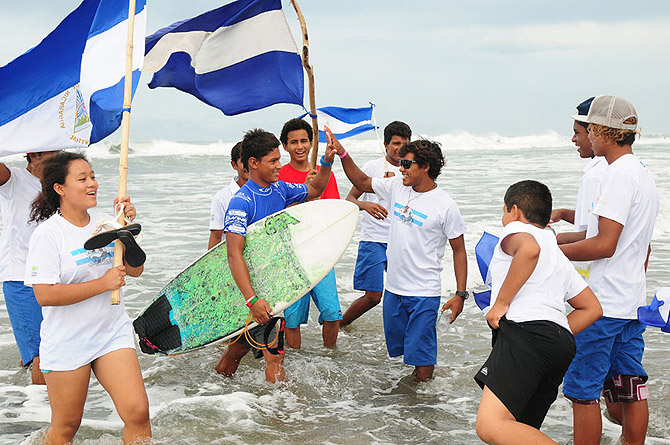 France’s Nomme Mignot posted the highest heat total score, with 15.75 points, defeating Jorge Rivas (SAL, 8.90) and sending to the Repechage Rounds Malakai Martinez (CRI, 6.85). Mignot also had the highest single wave score of the day in this heat, earning a 9.25.

The 2013 DAKINE ISA World Surfing Games resumes Monday at 7:40am with The Morning Show hosted by Chris Ernst and Mateo Rojas.