Day 6 of the ISA World Masters Surfing Championship was greeted once again with a beautiful warm and sunny morning, and excellent surfing conditions with waves in the overhead range.

Due to the extreme morning low tide, the competition was put on hold for an hour and a half to allow for optimal surfing conditions and give the athletes the best chance of performing in the day’s best waves. Once the competition resumed, the surf improved throughout the day.

In a stacked heat during the Masters (under 35) Qualifying Round 5, the first two finalists in the division were confirmed. With a score of 13.53, South African Greg Emslie defeated 2012’s runner up in this division, Sunny Garcia (HAW, 11.80), sending Kalani Robb (HAW, 11.17) and Magnum Martinez (VEN, 6.53) into the Repechage.

“It was an amazing day with good sized waves and more tension in the water,” remarked ISA President Fernando Aguerre. “As competition is nearing the end, all surfers are performing amazingly, but of course some people will be eliminated. Today is getting down to the wire. Montañita is going to have great waves for the last two days of competition, with Saturday being bigger and Sunday the biggest day. We couldn’t have scripted better this event.”

It was an action packed day where some surfers had to compete up to three times because they were surfing in multiple divisions. Most of the action that took place was in the Repechage as the surfers were trying to avoid another defeat, which would put them out of the contest. Every division except Grand Masters has confirmed two out of the four finalists.

The remainder of the finalist will be confirmed on Saturday during the final rounds of Repechage. 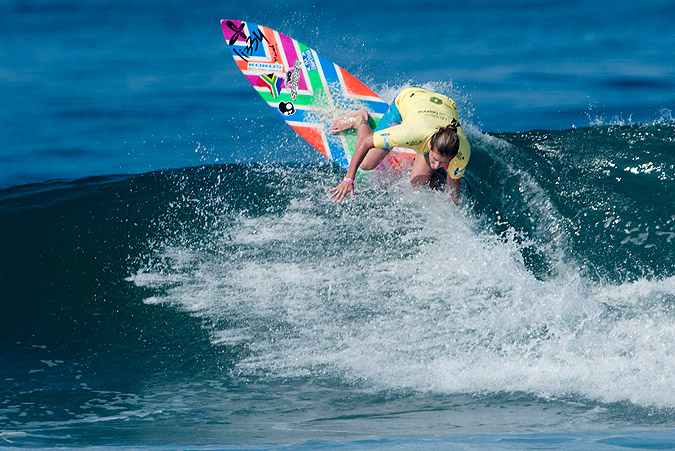 South Africa’s Heather Clark advanced to the Women’s Repechage Final in hopes of making it to the Women’s Final on Sunday. Photo: ISA/Rommel Gonzales

In the Women Masters division, 2008 and 2010 ISA Women’s Masters World Champion Heather Clark from South Africa was the top former. Clark posted a total heat score of 15.00, advancing along with Uruguay’s Maria Celia Barboza with 9.00. Japan’s Akiko Kiyonaga placed third with 5.34 and the upset of the heat was the elimination of last year’s Copper Medalist Lucila Gil (ARG), who was fourth with 5.33.

Olivenca posted the highest total score of the division with 15.67 points. Schafer placed second with 14.33. In third, Reuben Balmores (HAW, 12.70) and fourth Glen Valaire (AUS, 12.43) will have to fight through the Repechage to get to the Finals.

Saturday will be an interesting day that will decide the rest of the finalists and will also feature the two semifinals of the ISA Aloha Cup, a tag-team relay competition featuring the top 8 finishing teams from last year’s Masters, each with teams made up of 4 men and 1 women.

Ecuador has a rich history as the country that has supplied balsa wood for surfboard shapers for decades.  For more than 4,000 years, people from the local Valdivia culture, were able to navigate in open seas as they made pilgrimages to a sacred island- La Isla de la Plata- located 30km from the coast. This expression session symbolizes the local culture that has been around for thousands of years along with the sustainability of using the material that is used to make these surfboards.

The ISA World Masters Surfing Championship resumes Saturday at 7:40am (Ecuador) with The Morning Show hosted by Mark Fewell featuring Sunny Garcia and Greg Emslie, which will be broadcast live on the internet at www.isawmsc.com.