Solid Waves Continue While the First Finalists Are Confirmed

Day 5 of the ISA World Masters Surfing Championship was greeted with a beautiful sunny morning and over-head waves at the perfect right hand point-break in Montañita, located in the province of Santa Elena, Ecuador.

Both the Grand Kahunas and Women’s Masters have confirmed the first finalists of the event: Layne Beachley (AUS) and Rochelle Ballard (HAW) for the Women’s Masters, and Allen Sarlo (USA) and Craig Schieber (CRC) in the Grand Kahuna’s. They will be joined by two surfers, who will advance through the Repechage. 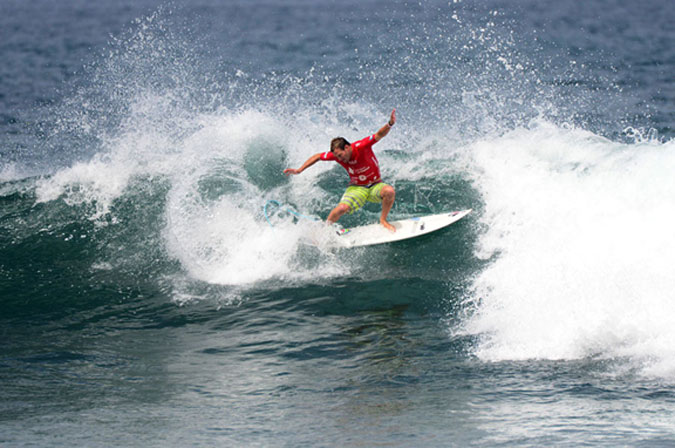 “What an amazing day of competition,” remarked ISA President Fernando Aguerre. “The combination of the increase in swell and the high performance surfing by the world’s best Masters, delivered a very exciting day. The World Championship is only getting more thrilling as we reach the last days, so don’t miss any minute of the action.”

As expected, the swell filled in and delivered 6-8 feet waves. The conditions in the morning were excellent with sheet-glass ocean surface. However, the wind typical for this time of year picked up and turned onshore as the day went on. Even so, Montañita delivered great waves all day.

According to Surfline’s official forecast, similar conditions are predicted for tomorrow with waves in the 4-6 feet range with occasional 8-foot sets.  A new, and much larger swell is forecast in time for Sunday’s Finals.

The competition is reaching its final stages. The surfers are fighting for the 1st and 2nd places in their heats to keep advancing through the Qualifying and Repechage Rounds. Unfortunately, for the athletes who place 3rd or 4th in the Repechage, their hopes have come to an end.

The Kahunas saw their best action in Heat 1 of Qualify Round 4, featuring Brazil’s Jojo de Olivenca, Reuben Balmores from Hawaii and Jim Hogan from the United States. De Olivenca had the best heat total in the division today, earning 16.23 points, defeating Balmores (11.77), who finished in second place and sending Hogan (7.77) to the Repechage with third place.

Emslie posted a 9.50 and a 9.27 on his two best individual waves in this heat, placing ahead of his rivals after only five minutes into the heat.

The Grand Kahunas division had its first two finalists in Allen Sarlo (USA, 13.33) and Craig Schieber (USA, 10.96), who are also assured a Medal after placing in 1st and 2nd respectively.

During the Women’s Masters, Layne Beachley (AUS) and Rochelle Ballard (HAW) secured a Medal for their countries after solidifying their birth into the final.

The ISA World Masters Surfing Championship resumes Friday at 7:40am (Ecuador) with The Morning Show hosted by Mark Fewell, which will be broadcast live on the internet at www.isawmsc.com.