The 2013 ISA World Tandem Surfing Championship (WTSC) was held July 27 and 28, 2013 in Biscarrosse, France. Below is an interview from Surfing France with the new ISA WTSC Champions.

Rico Leroy and Sarah Burel are the new ISA Tandem Surfing World Champions, who were crowned in Biscarrosse. For the couple, this title is above all dedicated to a passion that has lasted ten years.

How does it feel to be world champions?
It’s always fun. We won twice the World Cup (2009 and 2010) circuit, but never attained the title in the ISA competition. We have been looking for this since 2006. This is great! 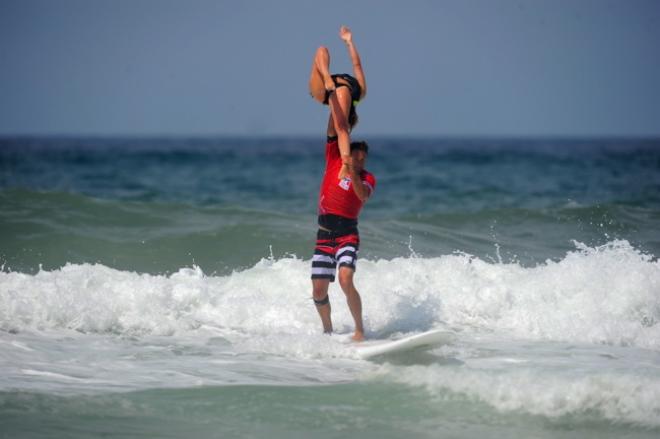 Good conditions allowed the duo to win the Final, thanks to his mastery in good sized waves. © Photo Antoines Fair / FSS

What made the difference in the final?
It was not two to three meters as we like. But it was a little bigger than expected and the waves were very hollow, with lots of power. Our way to surf the waves made the difference. Hawaiians that we had given ourselves as favorites are more accustomed to the easy waves of Waikiki. They were very good at the limit of their expertise in these waves. If it was smaller and less powerful, they could not express themselves. There was a day in waves so good for us. But if competition is repeated again tomorrow, in smaller waves, the result will certainly be different!

What are your goals now?
We do not really have any long-term goals. We will not walk away with the idea of retaining the title. There is no money in the surf business, we do not have the budget to go to competitions across the world. We just want to have fun, take our foot. Saturday, even if it had been fourth in the final, it would be out of the water with a smile because it was fun.

Do you think surfing Tandem may be more publicized with your title?
Lacanau hosted the ISA World Championship in 2009, it changed nothing. The surf is always has good media in the general public but not our sport. But it does not bother us, it is a passion. But if we are offered a help to defend our title in Hawaii next year, it will not hurt!